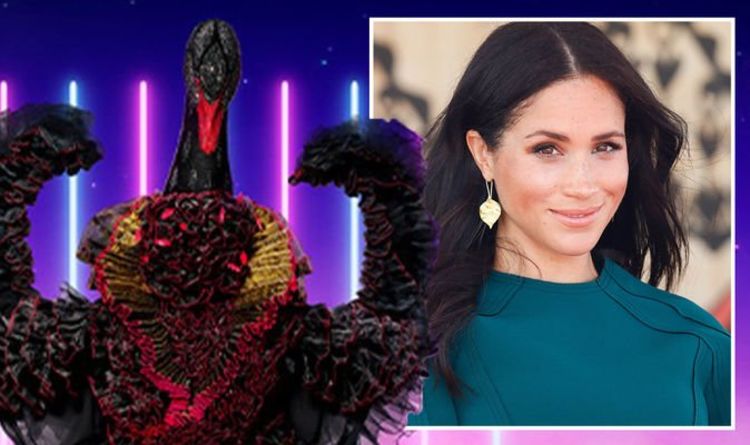 ITV viewers were delighted to see The Masked Singer return for a second series last night as they were ready and waiting to put their detective hats back on once more. With clues soon given to viewers surrounding the identity of the performers, fans soon took to social media to share their guesses. Swan was one of the most intriguing prospects amongst the new cohort, with some, including Jonathan Ross, left convinced Meghan Markle could be behind the mask – here’s why.

The competition quickly got into full swing with a host of impressive performances from the new batch of stars.

Last night, half of the contestants took to the stage for the first time in three separate battles before one of the bottom three was eliminated.

It was Alien who became the first to wave goodbye to the show last night before being unveiled as pop legend Sophie Ellis-Bextor.

Many fans had correctly guessed the singer after spotting her distinctive vocals, which weren’t completely covered – despite her best efforts.

Another person who fans quickly got onboard try to guess the identity of was Swan, who teased royal links early on.

Swan performed a dazzling rendition of ‘That Don’t Impress Me Much’ by Shania Twain.

Although she ended up in the bottom three, she was saved by the panel and put through to another week of the competition.

Of course, it didn’t take long for fans to start speculating who might be hiding underneath the costume.

“Why was my first guess for the swan Meghan Markle- American, loyal and royal lmaooo #MaskedSinger,” said another.

And they weren’t the only ones, as panellist Jonathan Ross also placed his bets on it being the well-known member of the Royal Family.

Many fans believed the dance floor connection hinted they had been involved in the hit BBC contest.

Other clues included having “the freedom to spread their wings” as well as being loyal, strong and independent.

But who will be the person unveiled as Swan in the weeks to come?