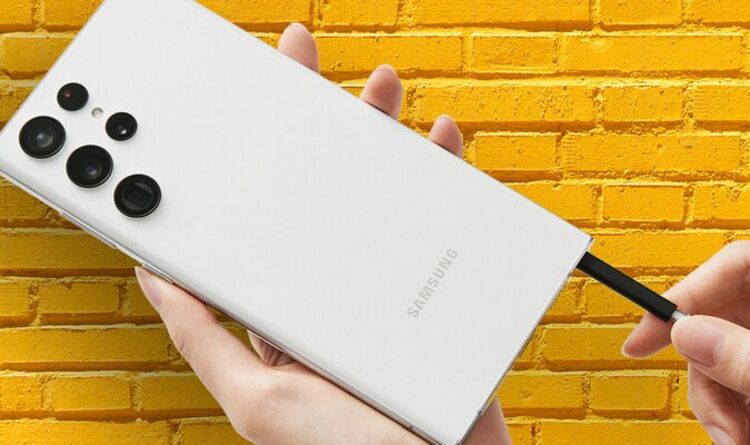 The S Pen is back! Almost two years after Samsung scrapped its popular Galaxy Note range of smartphones and sent this digital stylus to the history books, the S Pen is making a dramatic comeback. For the very first time, this useful accessory will be included as part of Samsung’s Galaxy S range of handsets. And it’s all thanks to the launch of the new Galaxy S22 Ultra.

This ultra-premium flagship has just been unveiled at a gadget-packed Galaxy Unpacked event, and the headline feature is the new and improved S Pen. This upgraded stylus now includes a nib with lower latency than anything Samsung has produced before with the firm boasting that it will feel more like writing with real ink and paper.

Helping to improve the experience further is some clever AI that predicts where the pen is about heading next on the screen, so the line you’re etching doesn’t need to wait for input from the pen. This should cut out any lagging and make things feel even more fluid.

Just like the old Galaxy Note handsets, once you’ve finished your doddles, annotates or games, you can store the S Pen inside the body of the phone to keep it safe and recharge its built-in battery.

For those who have missed the S Pen, this is a great upgrade for the Galaxy S Ultra line, but there’s more to this device than just that new writing accessory.

The Galaxy S22 Ultra gets a huge 6.8-inch curved QHD+ AMOLED screen with a 120Hz refreshed rate for super speedy scrolling. When playing games, the touch sampling rate can also be boosted to 240Hz which should make a gun-blasting session on Fortnite feel more fluid.

Spin the Ultra around and there’s a quad rear camera that includes new ultra-wide, wide and telephoto sensors.

The main wide camera has now been upgraded to include a massive 108-megapixel sensor which Samsung says helps the Ultra’s camera take the ultimate photos even in very low light. There’s also the option to get up close and personal thanks to a 10X optical zoom and ludicrous 100X digital zoom.

Those who prefer shooting video will also find improve image stabilisation and Auto Tracking which makes sure the subject always stays perfectly in focus.

Head under the aluminium body and a new Exynos 4nm processor improves the overall performance and also enhances the AI capabilities of this device. One of the biggest features of this clever intelligence is helping to boost photography with Samsung promising professional images can be shot by even the biggest amateur.

Along with that better processor, there’s also a massive 5,000mAh battery which should easily last a day and, if you buy a faster charger, it can be refilled at a rapid rate. Wireless charging also features for those who don’t want to be bothered plugging things in.

Out of the box, it will run Android 12, has an IP68 water resistance rating and, if your network has switched it on in your street, there’s the option to access 5G data speeds.

If you fancy taking delivery of the S22 Ultra then it comes in a number of colour options including Phantom Black, Phantom White, Burgundy and Green.

To help soften the blow, Samsung is promising some generous trade-in discounts for those happy to hand over their old devices. There’s also a year of free access to Disney+ and a free pair of Samsung Galaxy Buds when you pre-order.

The S Pen is back! Samsung’s new S22 Ultra gets the upgrade fans have been missing