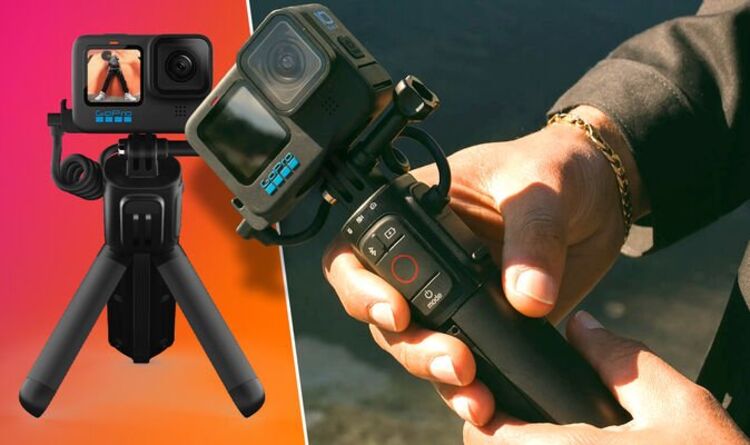 GoPro has unveiled an all-new Volta handheld grip that brings quick access to some of the most common controls for your camera and triples your battery life. Yes, really. Attach a GoPro HERO 10 Black camera to the Volta grip and you’ll get four hours of recording in pixel-packed 5.3K video recording at 30 frames per second. Better yet, you’ll be able to shoot for even longer when filming at lower resolutions.

The Volta, which is made with 35 percent recycled plastic, isn’t simply an external battery pack moulded into a handheld grip.

The plastic handle can be split into three strands, which can used be used like a tripod so that your GoPro free stands. This is ideal for long stationary shots or time-lapses. And if you’ve placed your GoPro elsewhere to film from a distance, the Volta can act as a remote control – controlling the action camera from up to 98-feet (29 metres) away. That’s going to be useful for group photos.

The Volta handheld grip is weather-resistant, capable of going out in snow and rain. That makes sense, for the last few years, GoPro has built its cameras to be water-resistant without the need for a case or extra housing. However, if you had to shield the handheld grip from a few spots of rain …that would make all of that hard work waterproofing the cameras a little pointless.

But while you should have no trouble filming out-and-about in the rain with the combo of a Volta grip and a fairly recent GoPro camera, this accessory isn’t going to work for any underwater shooting. That’s partly due to the fact that GoPro hasn’t tested the Volta grip to a specific IP rating (the universal grading system used for dust and water resistance) but primarily it’s because, in order for the Volta grip to power your GoPro, you need to have a USB-C cable from the handheld grip plugged into your camera, which reduces the effectiveness of the water-resistance built into the GoPro.

As mentioned above, the Volta handheld grip has a number of buttons built into its designs, which offer quick access to some of the most commonly-used camera features. This includes a shutter button, as well as the ability to toggle between camera modes (photo, video, time-lapse). These big buttons should be perfect when handling the Volta in gloves, like when filming winter sports.

The Volta recharges its built-in 4900mAh battery cell via USB-C, so you’ll be able to use any charger with a recent GoPro camera. Likewise, since USB-C is rapidly becoming a standard, you’ll be able to use the charger that shipped with your Nintendo Switch, Android smartphone, iPad Pro, or MacBook. A GoPro Supercharger fast-charger, which is sold separately, can top up the Volta grip from empty to 100 percent in two-and-a-half hours. If you’re using the charger that came with your GoPro camera, it’ll take a little longer than that.

Volta is compatible with any GoPro camera that uses USB-C (as this is what it uses to connect with the camera), which includes the GoPro HERO 9 Black, HERO 10 Black, GoPro MAX, and more. If you’re in a pinch, you can use the Volta as an external battery pack for any USB-C device, like a Nintendo Switch, a new Kindle Paperwhite, wireless earbuds from Samsung, and much more.

The Volta is available to buy right now, with a price tag of £83.99 for GoPro subscribers. If you’re not a member of this subscription plan, which offers free cloud backup for all of your video clips and discounts on the latest GoPro cameras and accessories, you’ll need to fork out £119.99 for the Volta.

This exciting new grip isn’t the only new accessory announced by GoPro.

The action camera has also revealed a new Media Mod, which brings a directional microphone for enhanced audio, two cold-shoe mounts and ports for 3.5mm mic and HDMI-out to your camera. It also announced the Light Mod – a powerful LED lighting with four levels of brightness up to 200 lumens. Combined together with the Volta, GoPro is calling this triple-threat the “Creator Edition”, which is aimed at YouTube stars and influencers who need to quick access to lighting, good audio, and video quality up to 5.3K in a single pocket-able package.

“HERO10 Creator Edition is like having Hollywood in your hand. It’s the perfect setup for recording professional-quality video when vlogging, filmmaking or even live streaming,” says GoPro CEO and Founder Nicholas Woodman. “Leave the extra batteries and gear behind, all you need is the Creator Edition and you can create cinematic magic – all day long. You’ll have to recharge and refuel yourself before you even think about recharging your GoPro.”

Creator Edition is available anywhere that sells GoPro. Right now, subscribers can get the GoPro HERO 10 Black – the latest model from the action camera brand – the Media Mod, Light Mod, and Volta handheld grip for £508.45. Those without a subscription will need to spend £809.94.

This amazing GoPro bundle will solve all of your battery woes

Use Microsoft Teams? Don’t join another meeting until you know about...