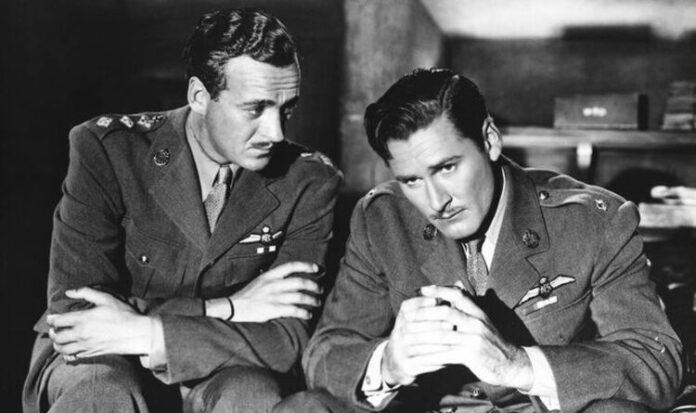 In 1938, the two stars ignited the screen in patriotic morale booster The Dawn Patrol about heroic British pilots in World War I. On the screen, they played plucky square-jawed chaps, idealised versions of an honourable, proper British male. The reality was very different. Apart from the fact that Flynn was an Aussie (born in Tasmania), the pair both became notorious in Hollywood for their voracious sexual appetites and had just set themselves up together in a home where they could indulge themselves freely.

Flynn was already a major star after 1935’s Captain Blood and the pair had starred together in The Charge of the Light Brigade in 1936.

Niven’s career was also blossoming fast. He gave credit to British actress Merle Oberon, with whom he lived during his first years in Hollywood. As well as teaching him about the craft and the industry, she wanted to marry him – but the young actor was having too much fun already with numerous affairs and did not want to be tied down.

He later said: “I have just a few regrets. One of the biggest is not marrying Merle when I had the chance… But I just couldn’t get enough when I was a young man.”

He moved out and the opportunity to set up home with his fellow philanderer seemed ideal – until Flynn crossed the line.

Niven added: “That’s the sort of thing schoolboys might do, and I felt that it was time he really grew up, and I told him so, and he said, ‘Oh come on, sport, you and I, we’re pals, and there’s nothing wrong in a couple of pals having a little fun together.’

“And then he tried to grab me again. I had no idea where this came from. I told him he should grow up and that I was heading home, and he got rather nasty and was almost spitting with rage. He yelled, ‘I think you’re the one who should grow up, Niven. This is Hollywood. People here are phoneys. They f**k anything that moves. What makes you so f**king different?'”

Rumours of bisexuality have dogged Flynn’s legacy, but the actor never openly admitted or discussed any such thing.

Niven, meanwhile, fell in love and tried to settle down with his first wife, Primmie Rollo. They married in September 1940, while the actor was in active military service during World War II. Two children swiftly followed, David Jr in 1945 and James in 1945.

Despite deeply loving his family, Niven could not change his ways and later admitted his regret: “I was a fool. When we were apart during the war, it was all too easy to have sex with other women who wanted to go to bed with a Hollywood movie star. Some of them no more than 16, but I was insatiable, you see – always have been. It’s a terrible flaw in me. I can forgive myself by and large, but to be unfaithful to the best wife a man ever had was unpardonable. I knew it at the time, but my erection was stronger than my spirit, if you’ll pardon the vernacular.”

Tragically, Primmie died on May 21, 1946, just six weeks after they moved to Hollywood. During a dinner party at Tyrone Powers’ house, all the guests played hide and seek with the lights out. Primmie opened the door to what she thought was a closet, but instead fell down the stairs to the basements and fractured her skull.

Devastated, Niven later admitted he almost attempted to take his own life. He swiftly remarried, to Swedish model Hjördis Paulina Tersmeden just weeks after meeting her in 1948.

In public, the actor suavely spoke warmly of her and even took responsibility for a four-month separation, but friends and sources reported the marriage was strained due to his continuing infidelities and her drinking and struggles with mental health.

Roger Moore once recalled: “She was a bi**h to him. David was a dear, dear friend of mine who did nothing but try to please her. In return, Hjördis showed him nothing but disdain.”

They never divorced, but before his death in 1983, Niven spoke of hoping to be reunited forever with Primmie.