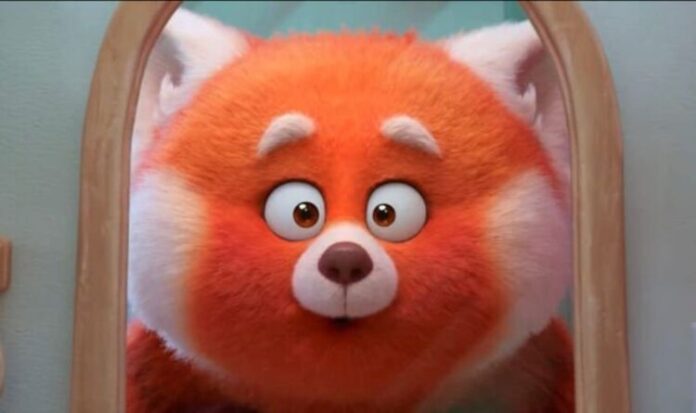 It’s set in 2002 as 13-year-old Toronto schoolgirl Meilin Lee (voiced by Rosalie Chiang) discovers that raging hormones have unlocked a hairy family trait. When angry, excited or embarrassed, she transforms into a giant red panda.

Michael J Fox’s Teen Wolf covered similar ground in the 1980s but, in dealing specifically with female puberty, Turning Red feels like a completely different beast. When we meet Meilin, she’s a grade-A student who works at the family temple run by her fearsome, over-protective mum Ming (Sandra Oh).

But something monstrous is stirring.

For a reason, she barely understands she finds herself fancying on the older kid who works in the local shop. When the crush makes her “panda” for the first time, the giant Meilin shuts herself in the bathroom. Her mum is slow on the uptake: “Did the red peony bloom?” she shouts.

Meilin learns that this metamorphosis has been passed down the female line. Her mum, grandmother and aunties also had furry alter egos and were “cured” by a panda-banishing ritual.

But, after discovering she can control the panda in the calming company of her gang of girl pals, Meilin starts to embrace her animal instincts.

The relationship between Meilin and her mother lies at the film’s heart, sharp writing provides the laughs, and Billie Eilish delivers the music for the fictional boy band that Meilin and pals are obsessed with.

The finale, a spectacular riff on Godzilla, is wonderfully unhinged. After a string of efficient but forgettable Pixar sequels, writer-director Domee Shi has unleashed the studio’s inner weirdo.

Turning Red review: An amusing apt metaphor for puberty in this heart-warming animation