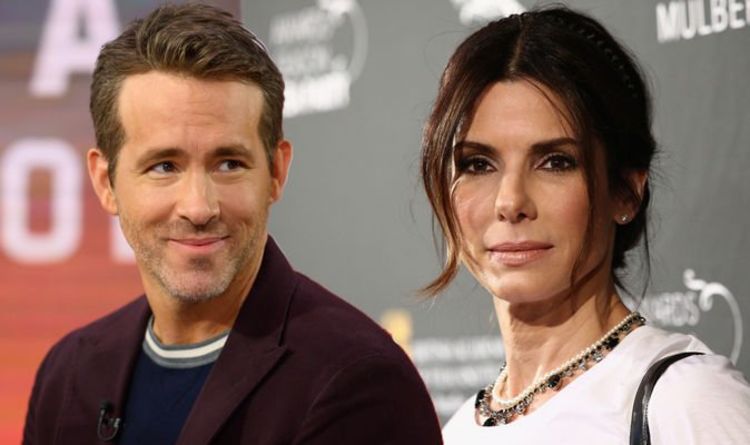 Bullock recently appeared on the About Last Night Podcast where she spoke candidly about her on-screen relationship with Reynolds. The Canadian actor is best known now for playing Marvel hero Deadpool as well as the Pokémon hero from Detective Pikachu. But back in 2009 he was a romantic-comedy actor who struggled to keep everything hidden away during intimate scenes.

Bullock described one sex scene during The Proposal, saying: “We had to do the naked scene that day and we had a closed set, which means no one’s allowed to be on there, just hair and makeup coming into fluff and hide.

“‘Yan and I have these flesh-coloured things stuck to our privates, my hair is strategically over the nipples and Ryan’s little – not little, at all! It’s just whatever’s there, and I don’t know because I didn’t see it, didn’t look! – is protected and caressed and stuck in wherever it needs to be stuck.”

However, she added that, during a fateful moment that involved their characters falling on the floor together, things went awry.

She said: “Then, I hear [director] Anne Fletcher from the darkness go: ‘Ryan, we can see your ball sack!'”

Bullock went on: “I’m like, oh God! Because you wanna look down but I’m like: ‘Don’t look down. Don’t look down.'” She joked that director Fletcher “boomed” the announcement as loud as she could. The Academy Award-winning star added: “Everyone in the darkness spun around to see if they could find a monitor [to look]. I was like: ‘Anne, there’s a way to present that information!'” Bullock assured the podcast host she didn’t look at Reynolds’ unexpected wardrobe malfunction, however.

Bullock told TMZ at the time: “I think there will be a collective sigh amongst women in the United States when I say: he’s not my lovah, he’s just an amazing friend I’ve had for 10 years.

“And I hope there’s more friendship like that, but I don’t get his loving after dark.”

Reynolds was keen to sell the same story when he was asked about any possible romance with Bullock.

Reynolds, who is 12-years younger than Bullock, said in 2013 he would “love to do another movie with Sandra”.

He went on: “We’ve talked about it. We had such great chemistry [in The Proposal] – that was based on 10 years of friendship.

“We had known each other for a long time when we went into that. If it’s the right [project], we’ll do it because it’s like working with family. It’s a great experience.”