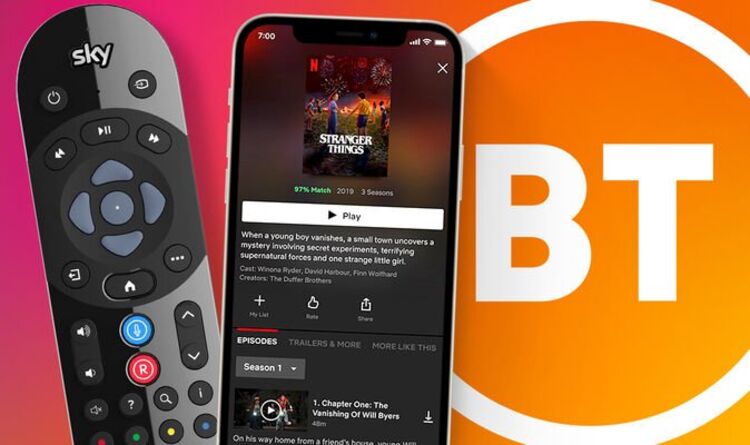 Time is running out on this incredible deal, which bundles a Netflix subscription and access to Sky TV’s exclusive channels for just £6 a month. For comparison, Netflix’s most affordable subscription tier will cost you £6.99 a month – 99p more, and you’ll only be able to watch boxsets, blockbusters and documentaries included with Netflix. With this mind-boggling deal from BT, you’ll get access to Netflix, Sky TV, and 200 Freeview channels on its BT TV set-top box. And best of all, the deal is available to new and existing customers …but only if you sign-up for the BT Entertainment bundle before the deadline at midnight on April 14, 2022.

BT usually charges £17 a month for the BT Entertainment bundle, so the latest discount will save you £264 over the course of the 24-month contract. Even if you’re not interested in a BT TV box or access to Sky TV channels, it’s worth taking advantage of the deal for Netflix alone. As mentioned above, following an unpopular price rise for all Netflix customers earlier this year, the Basic package from Netflix now costs £6.99 a month – or 99p more than BT is charging for the same subscription in its Entertainment bundle.

But the £6 a month bundle also includes access to hundreds of on-demand boxsets from Sky TV, including exclusive shows like Mare Of Easttown, Brassic, Succession, The White Lotus, as well as live channels like Sky Atlantic, Sky History, Sky Max, Sky Crime, Comedy Central, and MTV. Sky Atlantic is available on BT TV as you’ll be watching via a NOW Entertainment Membership, formerly NOW TV.

Sky Atlantic, which is home to some of the biggest dramas – like Gangs Of London, Succession, Mare Of Easttown, Little Big Lies, The Undoing, Game Of Thrones, and The Gilded Age – is exclusive to Sky Q, Sky Glass and NOW subscribers. The channel isn’t accessible on Virgin Media’s TV 360 set-top box, even when customers pay extra to bring Sky TV channels to their package. NOW is tightly integrated into BT TV, making it easy to access on-demand boxsets and live channels.

The BT TV box included with the BT Entertainment bundle promises to be a great way to watch 200 or so Freeview channels. The box supports up to 4K Ultra HD picture quality, streaming services like Netflix and Prime Video are deeply integrated, there’s voice search functionality – so you don’t have to worry about typing out film titles and directors using the alpha-numeric keypad on the remote, and you can pause and rewind live television. The BT TV box also has enough storage built in to store up to 600-hours of recorded telly.

That’s quite a few series and movies to keep you busy!

But what if you already pay for a Netflix subscription, should you still opt for this deal?

Yes, absolutely. If you already pay for your own Netflix subscription, thankfully, you will not need to ditch the account when you switch to the BT Entertainment bundle – losing your viewing history. BT offers existing subscribers the ability to transfer their accounts to their monthly BT bill without losing any data. At the end of the contract, you’ll be able to separate your Netflix account from your monthly BT bill again.

Time is running out for this blockbuster deal, which is only available until midnight on April 14, 2022.

If you’re already a BT broadband customer, you can add this to your existing bundle by clicking here. The deal is also open to those who aren’t currently signed up with BT. When you pick your new broadband plan with the company, you’ll be able to add the BT Entertainment bundle for an extra £6 a month during the checkout process. If you want to find the best broadband plan to pair with this BT Entertainment deal, check out our in-depth guide for the best BT broadband deals around right now.

Want to upgrade your Sonos speaker? You could get free streaming...