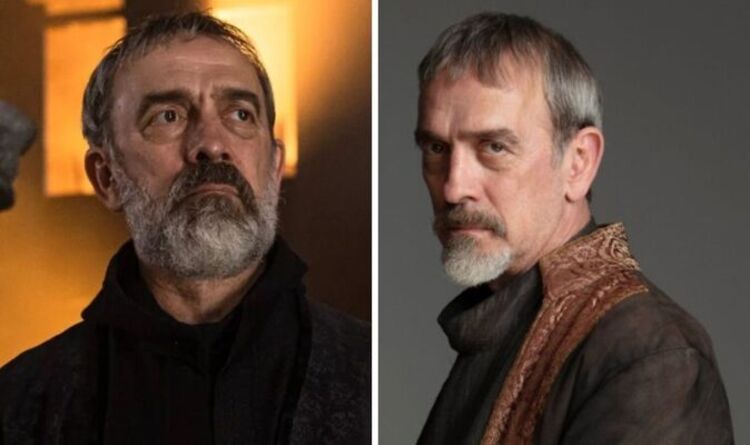 Netflix’s historical drama The Last Kingdom came to an end in March after the release of its fifth and final season. As fans reflected on the instalments and shared their opinions about the beloved characters, Aethelhelm star Adrian Schiller defended his character against criticism from viewers.

Throughout the seven years since The Last Kingdom was first released, fans have watched the violent wars as well as the joyous victories.

As the series introduced a plethora of characters, however very few were as cunning as Aethelhelm (Adrian Schiller).

He made his first appearance in season three and as the show progressed it was soon revealed he would stop at nothing to ensure sinister plans came to life.

Though Aethelhelm wasn’t the only character manipulated and killed, viewers often took to social media to share their displeasure about the character.

After the series came to an end, Schiller spoke about his character’s tactics and took a swipe at the critics.

The actor stated: “Aethelhelm is driven by an absolute obsession with making sure that his family become the Kings in Wessex and it is the deal that he made with Alfred.

“I think he regards Edward as being bound by Alfred’s promise.

“Edward perhaps doesn’t, but everything that he does is motivated by the desire to people the thrones of Wessex.”

“The ways in which he goes about things are not necessarily the most pleasant, but what he’s trying to do is what pretty much everybody else who is in a powerful position in this story tries to do, which is to secure that power, by pretty much whatever means necessary. “And neither Edward nor Uhtred, Aelswith, or Aethelred or Aelflaed, or anybody else, seem to really be terribly worried about killing people in order to get what they want.

“But I seem to be the one who gets it in the neck for doing it, I think it’s very unfair!”

While this was the case, fans will remember the actions he took when he was held captive by the Danes and Sigtryggr (Eysteinn Sigurðarson).

He was able to manipulate his way out of there by being sinister and poisoning Aelswith’s water, which made her extremely sick.

As the end of season four approached, the group were finally freed however Aelswith fell in the cliffhanger ending, which left fans unsure whether or not she survived the poisoning.

Thankfully season five arrived and while she did look frailer than usual, Aelswith had survived.

Aethelhelm on the other hand was confronted at knifepoint by Aethelstan (Harry Gilby) where he was forced to confess his role in Queen Aelfwynn’s (Phia Saban) death.

When the truth was revealed Aethelhelm was abandoned by his last ally, as a result, he became consumed with guilt and killed himself.

Thankfully for fans, they will soon be able to see more of their other favourite characters in the upcoming sequel film, Seven Kings Must Die, which is already in production.

The Last Kingdom is available on Netflix.