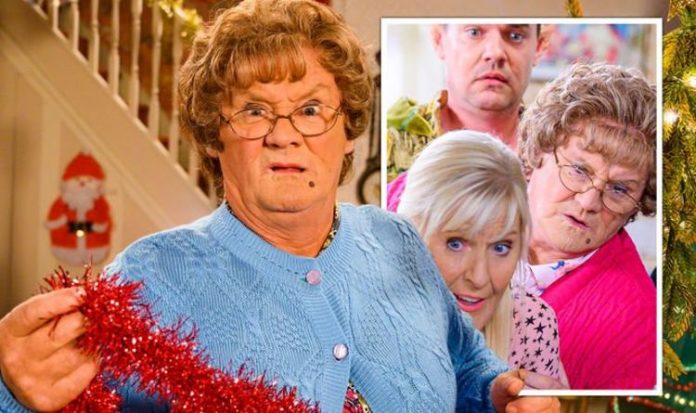 BBC viewers took to social media on Saturday to complain about the broadcaster’s New Year’s Day TV schedule. Some were unhappy that a special episode of Mrs Brown’s Boys had taken a slot in the holiday TV line-up. Many viewers complained about the comedy, requesting it be cancelled.

Mrs Brown’s Boys returned to screens on New Year’s Day with a special episode to celebrate the arrival of 2022.

The comedy follows the life and antics of Agnes Brown (played by Brendan O’Carroll).

The January 1 special saw Anges and her friends suffering the after effects of their New Year’s celebrations.

However, it seems many BBC One viewers were unhappy with the comedy’s holiday outing.

Meanwhile, others suggested those who disliked the programme should simply change the channel.

“All the comments about #MrsBrownsBoys from people clearly sitting watching it with NOTHING better to do than sit complaining. It’s 2022 surly if it’s that bad, change the channel,” @Grah841 said.

Mrs Brown’s Boys was a big part of the BBC’s festive TV line-up this year as it also aired an episode on Christmas Day.

However, despite the programme often featuring in the Christmas TV schedule in recent years, it’s been a while since there was a full series of Mrs Brown’s Boys.

The last proper series of the comedy show aired on the BBC back in 2013.

But, the show has since become well known for its holiday specials, including it’s Halloween episode earlier this year.

The show celebrated the spooky season with a Halloween special which saw Mrs Brown’s late husband haunting her.

The episode was a live event and also marked the 10th anniversary of the comedy series.