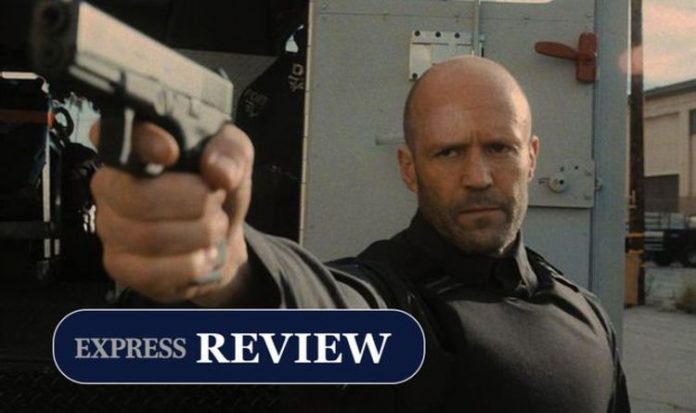 I was really surprised by how much I enjoyed Wrath of Man. On the surface, it is full of cliches. Statham plays a mysterious man who, for one reason or another, joins an armoured truck company that moves massive amounts of money between businesses and banks. There is, of course, one problem, though. Their protocol dictates that if they are robbed, they should simply give in to the attackers’ demands and file an insurance claim. But do you think that is the kind of response Statham’s H (yes, his name is H) is going to give? Hell no.

Within Wrath of Man’s first 20 minutes, it quickly becomes clear that H is not a man to be trifled with.

After being attacked by a number of aspiring thieves, he brutally kills them all with a pinpoint precision that leaves his colleagues suspicious.

The first chunk of the movie is an expert display in how to build suspense around an unravelling mystery. H’s intentions are a complete mystery, his background is intriguing, and his actions are absolutely enticing.

It shouldn’t be surprising considering Guy Ritchie (Snatch, Lock Stock, The Gentlemen) is behind the camera. His direction is enthralling, inspired and often transports viewers directly into the action.

But, before long, Wrath of Man drops the ball completely.

Instead of continuing the enthralling mystery that surrounds H, the film juts out into a three-month flashback that details exactly why everything is happening.

Gone is H’s mystery. Gone is his backstory – and gone is any semblance of interest in the plot with them. Once the pace changes H becomes an open book. A relatable man whose actions can now be justified. Why give him that out? He was infinitely better as the mysterious antihero. It was infuriating to watch.

It really feels like Wrath of Man systematically builds up some truly interesting concepts and set-piece events just to pull them apart piece by piece. It’s as if someone sat you down and detailed every single one of the 11 herbs and spices. I don’t want an explanation. Just give me the chicken.

Alas, it’s hard to stay too mad at Wrath of Man because, let’s face it, Statham is great. He really tries to work with his script, and with it, he manages to give an electrifying performance. He’ll certainly win hearts over with this one.

The third act ends with an exciting Heat-style bullet battle in a refreshingly unique venue – big points for originality – before falling into a great chase scene. Both of these will leave viewers guessing – and relatively entertained – for sure.

While not perfect, Wrath of Man could certainly gain a fanbase as one of the more interesting Taken-like movies out there, and with good reason, to be honest.

Also, Josh Hartnett is in the movie. He doesn’t do a lot, but it’s certainly great to see him on the big screen again.

It’ll be interesting to see how Statham, Hartnett and Ritchie work together in their next blockbuster, Operation Fortune: Ruse de guerre, due out next year.

Wrath of Man is available on Amazon Prime Video from Friday December 10.