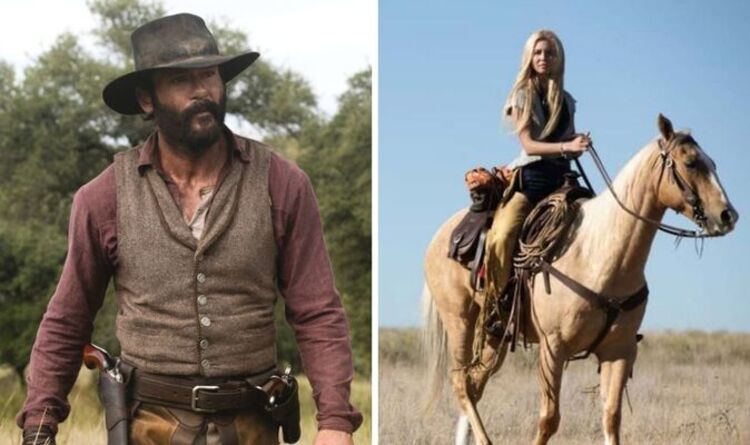 Y 1883 followed the adventures of the Dutton family as they took the treacherous journey from Texas to Montana to escape poverty. With a shocking eighth episode, it looks as though a new romance could be brewing amongst the group which could cause tension in the upcoming episodes of the Yellowstone spin-off.

At the end of episode five, Elsa Dutton (played by Isabel May) was thrown into a pit of grief when her boyfriend Ennis (Eric Nelsen) was shot dead.

The two had just gained a blessing from her father James Dutton (Tim McGraw) and had begun planning a future together before he met his demise.

It was during the journey when the travellers were ransacked by a group of bandits who pulled the trigger on Ennis, which left Elsa to continue on with a broken heart.

However, in the recent episodes, viewers have seen her get close to Sam (Martin Sensmeier) who comforted her after Ennis’ death.

A newfound friendship could suggest the two could take things further and eventually become an item.

As a result, viewers believe she will soon leave her parents and join Sam on his adventure instead, as a huge clue from episode one seemed to suggest so.

In the opening scene of the series, Elsa had woken up from an unconscious state only to find herself surrounded by complete chaos.

She noticed the waggons were on fire and a group of Native Americans shooting the immigrants she had been travelling with.

Just as Elsa went to shoot the attacker off his horse, he quickly retaliated and shot her in the stomach using a bow and arrow.

This brutal scene was evidently missing her parents who would’ve usually been at her side, therefore it could be a huge clue to suggest Elsa does eventually leave them.

As Y 1883 is the prequel series to Yellowstone, it’s evident James and Margaret Dutton (Faith Hill) will make it to Montana to purchase the ranch which will eventually be passed down to John Dutton (Kevin Costner).

In episode eight, Elsa did bring up the subject of leaving her parents to stay with Sam, however, her parents were having none of it.

It was an emotional moment for Margaret, as Anna reassured her she was woman enough to pick herself up if she got hurt.

Which made it seem as though it was fine for her parents to continue their journey without her.

Elsa told her mother: “I’ll ride with you to Oregon, then, I know where to come if I ever need a place to start over.”

However, with two episodes left of season one, it’s hard to believe she would travel to Oregon with her family just to return back to Sam.

Y 1883 is available to watch on Paramount+. A UK release date hasn’t been announced.