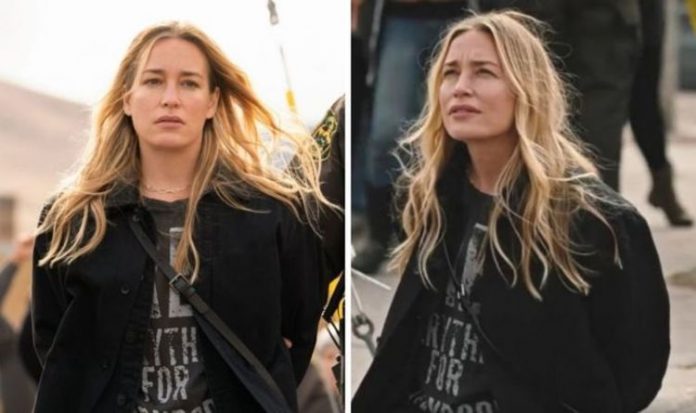 Although Yellowstone season four ended on an emotional note, the star of the Paramount Network series, let fans into a huge surprise. Piper Perabo, who plays Summer Higgins, revealed she had a family relation with the showrunners.

In an interview with TV Line, it was revealed that actress Piper Perabo was married to director-producer Stephen Kay.

When asked if he directed any of her season five scenes, she responded: “He did, we haven’t worked together in such a long time and it was so fun to work with him.

“The last time we worked together was on Covert Affairs which is the opposite of Yellowstone – it was so fun to work together.

“And because he works on the show, I know the cinematographers, I know so many people on the crew.

“It was so fun to work with him and to work with so many friends, that was one of the highlights,” she added.

While Stephen made his directorial debut on Yellowstone in season two, Piper made her first appearance as Summer in the most recent instalment.

She made a mixed first impression on fans after getting arrested on her first episode, for her role in the protest.

As an environmental activist, Summer was protesting against industrialized farming and the mass murder of animals in Montana.

The actress explained: “When she realizes that this airport is going to be built on this pristine land in the center of Montana, she decides to take that on and she doesn’t have any sense of the place that she’s getting involved in.”

Throughout the series, John and his family had been fighting off land developers who wanted to build on the land which had been in the Dutton family for six generations.

It had been under constant threat by casino moguls and the Broken Rock Reservation, an Indian Reservation which the Indigenous people wanted to reclaim.

However, as the ranch was one of the largest in America, there had been meetings with a million-dollar company to gut it out and build an airport.

Piper added: “She just knows the issue. And so she doesn’t know anything about the Duttons and how dangerous it is to mess with them.”

The Dutton had a hardcore reputation in Yellowstone as being a family not to mess with, as they weren’t afraid of putting an enemy six feet under.

Fans will have to stay tuned to see if Summer will learn the truth about the Dutton family the hard way.

Sadly season five has yet to be confirmed, however, express.co.uk will be updated with release information.

Yellowstone seasons 1-4 are available to stream on Paramount Network.

Yellowstone’s Summer star shares secret family connection to show: ‘It was so fun’