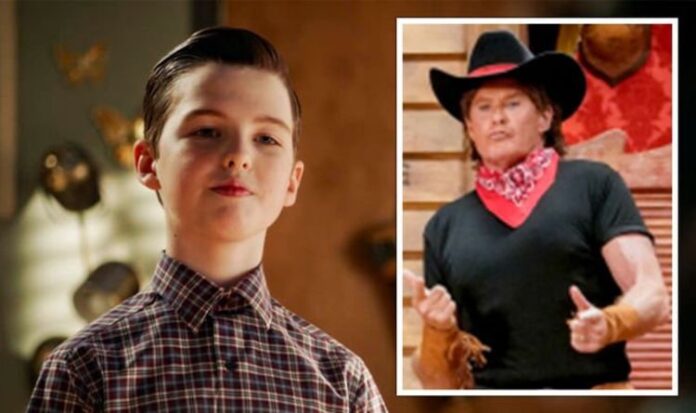 Ahead of Thursday’s episode of Young Sheldon, the show had already teased a “super fun” surprise was coming for CBS viewers. Fans expected it to be a callback to a The Big Bang Theory character. But nobody expected David Hasselhoff to come onto the show and cameo as a ‘90s version of himself.

He teams up with Lundy (Jason Alexander) to get his production off the ground.

They waste no time finding a theme and name, Cowboy Aerobics, but finding an investor proves to be tough.

Ultimately they convince Georgie’s Meemaw (Annie Potts) into putting her money into this bonkers idea, but that wasn’t enough for the project to actually pick up momentum.

The two start fighting with each other over how they will split the profits before even making any.

But, still determined to make Cowboy Aerobics happen, Lundy takes the first flight to California to meet up with none other than The Hoff himself.

The pitch for the Baywatch star to be the frontman of the workout tapes goes impressively smoothly and made for some incredible scenes.

Who would have thought that a line dancing David Hasselhoff could be such a smashing hit?

Another major ‘90s star also left her mark on Young Sheldon as the episode was in fact directed by Sabrina the Teenage Witch star Melissa Joan Hart.

This is not the first directing credit for Hart as she directed some episodes of Sabrina in the 2000s as well as episodes of The Goldbergs, The Watcher in the Woods and Santa Con.

Back in January, she also shared a behind-the-scenes snap of herself and the cast of Young Sheldon on Instagram where she said: “A career highlight to be at the helm on the amazing set of #YoungSheldon this week. I love working with talented, hard-working and funny people! #GodBlesstheFunnyPeople.”

“Gonna fill my feed with great memories of 2020 today!… Remembering all of this makes me feel like it was a full and fulfilling year for me professionally.”

Next week’s episode will focus on Sheldon settling into life at university.

His mother Mary (Zoe Perry) is worried about his social life and wants him to have a traditional college experience and suggests he join some clubs.

Of course, Sheldon isn’t having any of that and would rather spend his time with professors.

Viewers can expect to see all that go down in the episode titled A Pager, a Club and a Cranky Bag of Wrinkles.

Young Sheldon season 4 continues Thursday on CBS in the USA.