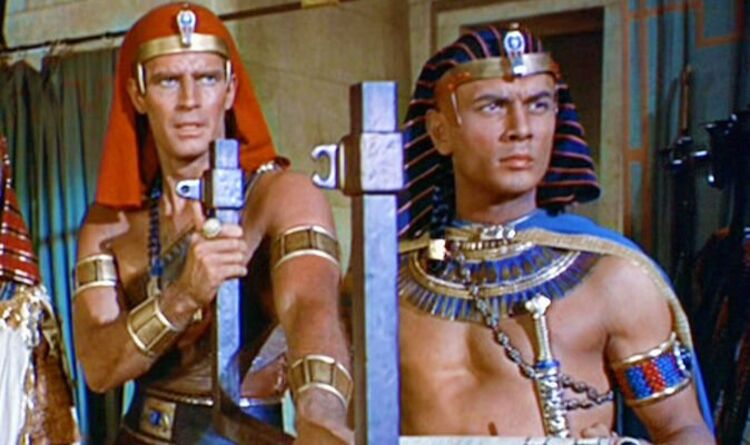 Brynner was a notoriously proud and prickly man, obsessed with always coming out on top, whether in billing or screen presence. He infamously cried when his King and I Broadway co-star Gertrude Lawrence died – because it meant he would get top billing at last outside the theatre. He liked it to be known that he prepared breakfast in a silk kimono, other stars commented how he was “never far from a mirror” and his on-set demands and dramas were legendary. When he heard he was starring opposite the strapping and impressive Heston, the ‘Mongolian’ star went into a frenzy.

These days it is common for action stars to be magnificently muscle-bound, but in the Golden Age of Hollywood, most male leads were simply fit and trim – unless they were ex athletes like Tarzan’s Johnny Weissmuller.

Heston, however, towered over everyone at almost 6’3 and was always in impressive physical shape. This was a problem for 5’7 Brynner, who would notoriously scuff up mounds of dirt to stand on in The Magnificent Seven so that he appeared taller than Steve McQueen.

Before he came to Hollywood, Brynner actually had a background as a circus acrobat and trapeze artist in Paris – before a horrifying fall broke many of the bones in his body. He still kept himself in prime shape and was one of the first Hollywood stars to (officially) pose for nude photographs with gay photographer George Platt Lynes.

Arriving in LA in 1940, during this first decade in Hollywood Brynner survived on bit parts and some nude modelling, while he had a long-term relationship with heartthrob actor Hurd Hatfield.

The King and I on Broadway catapulted him to stardom and 1956’s The Ten Commandments would cement his position as a major A-list film actor.

His pride and vanity would not permit him to be overshadowed by Heston, so Brynner began an intense workout regime, knowing he would spend much of the film showing a lot of flesh as the Egyptian Pharaoh Rameses, opposite Heston’s Moses. No doubt the stategic use of steps and hidden boxes helped make him generally appear only a little shorter than Heston.

His impressive physique also paid off later that year when he filmed The King & I opposite Deborah Kerr.

Brynner dedication to his career meant he spent much of the Ten Commandments film shoot on set in California but flying back in the evenings to perform The King and I on tour. The show had closed on Broadway on March 20, 1954a nd immediately started a national tour two days later which ran through to December 1945.

Along with Heston, Brynner was also one of the few leading actors who also got to travel on location to Egypt, Mount Sinai and the Sinai Peninsula.

It may have been gruelling, but playing two glittering monarchs at the same time no doubt appealed to his vanity, as well.

All his hard work and sacrifice paid off, with Heston later commenting he thought Brynner gave the best performance in the entire movie. Brynner’s son, Rock, said his father “was proud of his performance, and very proud of being in the film. He regarded it as the biggest film ever made, forever.”

The film was an enormous success and, adjusted for inflation, has remained one of the biggest box office hits of all time, alongside The Sound of Music and Gone With The Wind.

The success and kudos The Ten Commandments brought did not harm to Brynner’s ego, but he always remained touchy about his appearance. When he starred opposite Ingrid Bergman later that same year in Anastasia, she politely asked him if he would like to use any props to stand on. Brynner hissed back: “I am not going to play this on a box, I’m going to show the world what a big horse you are.”

In his early days of stardom, Brynner insisted a special lift was installed at the Broadway theatre where The King and I was playing. Not just for him, but big enough for his while limousine – so he could drive in and out without being bothered by fans.

A decade later, in 1965, Brynner starred with Marlon Brando in the World War II ocean-bound action thriller Morituri and managed to eclipse his co-star by demanding a landing pad be built onboard the ship where they were filming so his private helicopter could fly him back at the end of each day, while everyone else remained on board.