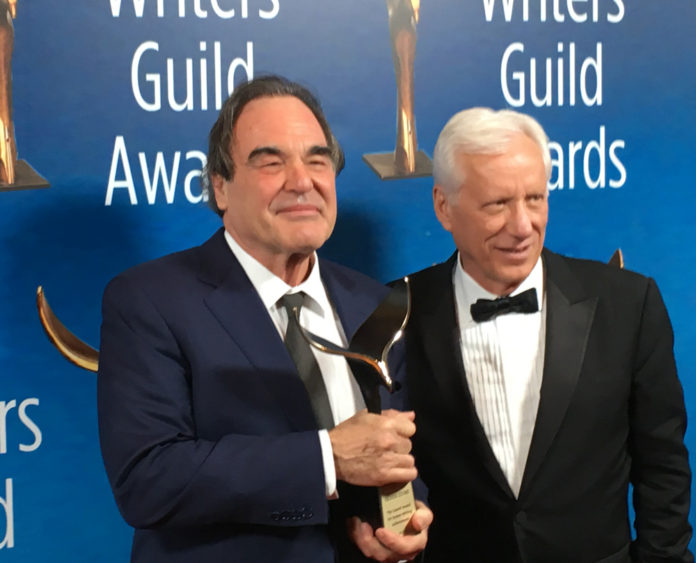 Conceived in 1952 the Laurel Award is a lifetime achievement award that the Writers Guild of America awards to a veteran screenwriter of high stature. According to the WGA documentation “is given to that member of the Guild who, in the opinion of the current Board of Directors, has advanced the literature of the motion picture through the years, and who has made outstanding contributions to the profession of the screen writer.

On Sunday night James Woods presented Oliver Stone with the Laurel Award for Screenwriting Achievement.  Oliver Stone’s is known for making such films as Platoon, Wall Street, JFK, Heaven and Earth and Nixon and most recently Snowden.  Stone’s films often talk about the human struggle.   After being handed the award Stone told the audience, “you can be critical of your government and your society.”

“You don’t have to fit in, it’s fashionable now to take shots at Republicans and Trump and avoid the Obamas and Clintons. But remember this: In the 13 wars we’ve started over the last 30 years and the $14 trillion we’ve spent, and the hundreds of thousands of lives that have perished from this earth, remember that it wasn’t one leader, but a system, both Republican and Democrat. Call it what you will: the military industrial money media security complex. It’s a system that has been perpetuated under the guise that these are just wars justifiable in the name of our flag that flies so proudly.

Stone has won Academy Awards for his work on Platton and Born on the Forth of July. Before becoming and Academy Award film maker, Stone served is a U. S. Army and fought in the the Vietnam War.