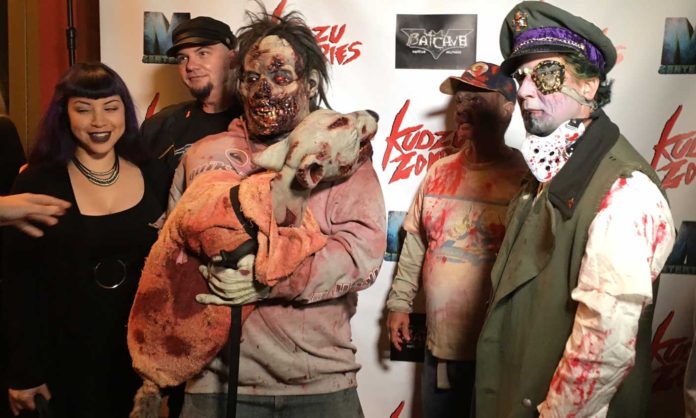 If you were a resident of Los Angeles you might have driven by Laemmle’s Ahrya Fine Arts Theatre and saw what you thought was a Zombie out of the corner of your eye.  You will be relieved to know that you weren’t imagining things and that what you saw was real.  No Zombie’s haven’t come to life, they were visiting the theatre for a limited sneak screening of Kudzu Zombies a new film by director Mark Newton.

If you were child of the 80’s you might have remembered that going to a horror movie was fun, just as it was scary.  Movies like the original Halloween and Friday the 13th are rare occurrences these days. 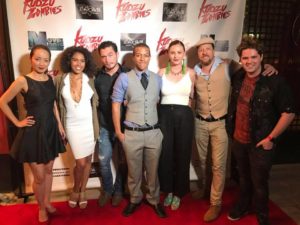 Kudzu Zombies is a film that will make the horror experience fun again.  Lonnie, a teenage crop duster unwittingly crop dusts a bunch of plants with an experimental chemical, that was meant to control the invasive Kudzu Vine.  After a group of people eat a pot pie served a fair, with the ingredient they become sick and die.  As the living part of the plant is still alive it takes over their body and they become zombies.

The zombies later bite other people who then get the infection and also turn into zombies.  A race then begins when a group of teenage friends, tries to find the scientist responsible for creating the deadly chemical, while trying to shoot and fight their way through a town of zombies.

You might recognize of a few of the actors in Kudzu Zombies.  Moses J. Moseley (the jawless zombie from 5 episodes of The Walking Dead) plays a major role in this movie as one of the surviving humans who fights to stay alive. Escalante Lundy who played Big Fred from Django Unchained also has a major part where he plays Ed Nelson, the guy who cooks the pies. Jeremy Sande who played Adam in Deep Water Horizon is also in the movie.

The movie is campy, fun and scary at the same time.  It brings the experience of the eighties horror movie to a new generation of movies goers and brings back the memories for children of the eighties