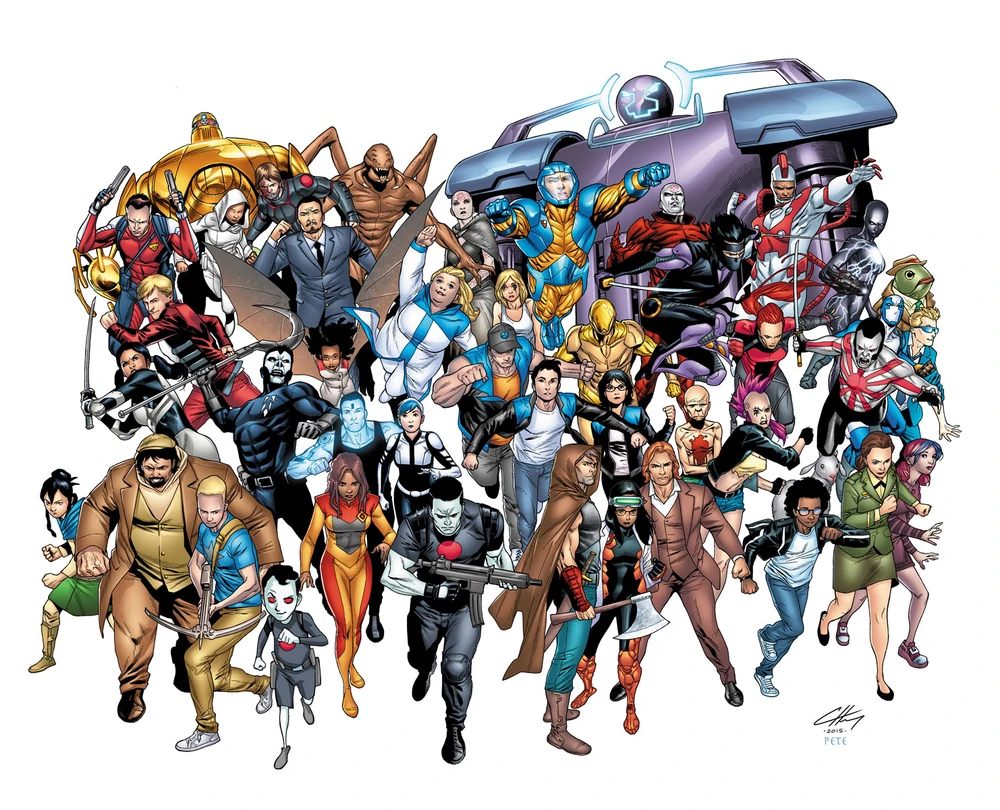 One must beware when looking at pocket universes as if they are the real thing; they’re not. They are groups of Characters tangentially related and often thrown into a soap operatic world, where individual disagreements and characters conflicts substitute – somewhat badly I might add – for actual conflicts based on wildly divergent backstories that make up a true Universe such as Marvel or DC.

The quick and cheap way around this is to create a group of superheroes out of thin air that are already formed or come together to defeat a powerful enemy.  And that is what we have seen produced outside the big two in recent years. Unfortunately, a group of heroes that come together to form a team does not make a universe in the sense of a DC or Marvel Universe. It can and sometimes does create a pocket universe. However, what is the difference between a pocket universe and a Marvel / DC Universe?

Imagine one wanted to create a Major league baseball universe and they call it the New York Yankees and have stories within the team about (spotlighting Aaron Judge’s HR quest for example) but in the end it is not a baseball universe, it would be a baseball Pocket universe. Instead, imagine something more along the line of Ken Burns definitive documentary series Baseball – all the stories of all the teams and all the players that played and all their conflicts both inside and outside the game (World Wars, The Great Depression the Civil Rights Movement etc.) as well as those inside the game – the rivalries between teams (Yankees v. Red Sox) as well as between individual players / managers (Maris v. Mantle, Billy Martin v. Reggie Jackson, etc.)

if I began with the original members of the Brooklyn Dodgers or the New York Yankees and then went through the different major players and then did this with every team over a decade or more, then and only then would I start to create an MLB connected Universe.

This is why Marvel and DC are true Connected Universes and The Boys, Jupiter’s Legacy, the Invincibles and nearly every other comic book franchise out there who are touting themselves as connected Universes are not, they are pocket-verses.

To create a true universe, you must begin with multiple characters in separate storylines in their own books. These heroes would develop as standalone characters and over time would create their own pocket universes within their storylines. For example, Thor has his supporting characters such as Loki, Odin, Frigga and Heimdall who were all developed and created in the Thor comics along with other allies and enemies such as Beta Ray Bill, Hercules, the Frost Giants and Hella to name a few. All these characters were developed over years to create fabulous storylines all interconnected but still it was a pocket universe. But when Stan Lee set Thor in the Avengers, he become part of the Marvel connected universe. Unfortunately, what creators are doing now is skipping over the years of developing the individual universes that that would fit in like a puzzle piece into the larger connected universe as a whole.

No one in the film industry understood this better than Kevin Fiege. He did with the Marvel Cinematic Universe what Lee did with the comic universe. He introduced all of his characters for the Avengers in individual movies to begin to give the non-comic book world an introduction to the Marvel cinematic universe. And therein lies Kevin Fiege’s genius: to see the whole as more than the sum of the parts.

So, by the time the film The Avengers came around, the non-comic-fans were already familiar with the Marvel universe. And by launching it in this way, he created the most successful film franchise in the history of the industry and the film world’s first “true” connected cinematic universe. A connected universe isn’t one film and a few sequels based on box office success. A universe exists regardless of audience expectations – the sequels are already built into the storyline as a natural progression. The sequels don’t continue the storyline, they compound and build upon it. That’s’ why the sequels are a natural progression – the characters grow organically.

Having seen the success of Marvel and to a lesser degree DC, some content producers, seeing the seemingly endless river of money available from studio and streaming media outlets, have creators trying to leapfrog the hard work and time of making an actual connected universe and just throw whatever they have on the shelf into a pot — cobbling a group of humorless, underdeveloped, gimmick saturated Costumesand more times than not simply stirring ina trite re-imagining of the classic Justice League storyline. It’s essentially an exercise in strip mining their somewhat shallow development to find enough of a story to create saleable product for consumers hungry for content.

Now you may be thinking that this is all a little depressing because there are no more connected universes available for development, but that would be wrong.

There are a handful of companies seemingly attempting to create a larger connected universe by building it over time with creative teams doing the work of building a universe, although these will take years if not decades to build out pocket-verses and then to connect them to a larger universe.

But there is actually one other truly connected universe out there that did it the right way from the beginning, that company is Valiant Comics. Valiant was created in the 1990’s by former Marvel Editor in Chief Jim Shooter along with a handful of some of Marvels best writers and artists including Bob Layton and Barry Windsor Smith.

Valiant actually started a step ahead of Marvel and DC; Jim Shooter — from his years at Marvel – understood the value of a connected universe, so from Valiant’s inception the world and more importantly the characters were connected. Shooter actually went as far as making sure all the early comics stayed on the same timeline. this ultimately became an impossible task but the connectivity has been there from day one and has stayed consistent.

Valiant is not a single comic book franchise like the pocket-verses, it is a publishing company that has published thousands of comics over a thirty-year period of time. That many characters and that many storylines serves as the bedrock of the Valiant connected universe, for lack of a better example, they are a mini-Marvel.

They have a wide range of characters that didn’t start out as a Justice League type team but had their own individual series, with the teams and team ups coming together in a non-forced way. Valiant had it right from the beginning and has carried on that tradition.

And since they were created in the 90’s, Valiant also reflects the complex and diverse nature of its audience as is evident in its lineup which includes, Ninjak an Asian/American super spy, think Batman meets James Bond. Shadowman, An African American anti-hero who fights the denizens of the Deadside to keep Earth safe. Gilad, a superpowered ten-thousand-year-old warrior who serves the will of the Earth. Harbinger, a group of young psiots who reflect a more grounded and realistic group of X-Men. A teenage Punk Mambo, with extraordinary voodoo powers And, a sixth century Visigoth warrior who ends up in the modern world with the most powerful battle suit in the Universe. Another one of Valiant’s top sellers is Bloodshot, a nanite powered superhero giving him strength and healing powers. Bloodshot staring Vin Diesel was Valiant’s first feature film which most people don’t know about because it opened in March of 2020, the week Covid shut the world down. Although it seems Bloodshot was evidently a standalone film, not dissimilar to Marvels early Wesley Snipes “Blade” films.