When was the last time you went to the movies and actually had fun?  I find myself asking that question sometimes and I don’t always remember the answer.  But this time I will. Ready Player One.

Ready Player One is based on Ernest Cline’s book by the same name. In short, the movie takes place about 30 years from now. Wade AKA Parzival (Tye Sheridan) lives in a rundown trailer park.  It’s world where people spend most of their time in virtual reality because the real world is dirty and ugly.  In this virtual world “The Oasis” is the biggest and most wealthy of its kind.  Everyone in the Oasis is an avatar and could look nothing like their real selves.

The creator of The Oasis, James Donovan Halliday (Mark Rylance) dies and leaves a sort of “Video Will” behind that leaves a challenge.  The challenge is to solve a set of puzzles (Easter Eggs) built into the games by the Halliday.  The first person who solves that puzzles inherits the Oasis, which at the time is worth $500 trillion dollars.

There are of course other people looking for this Easter egg that aren’t as noble.   A big corporation “IOI” was formed to hunt down that egg.  Nolan Sorrento (Ben Mendelsohn) an evil mastermind at IOI will stop at nothing to claim that prize. 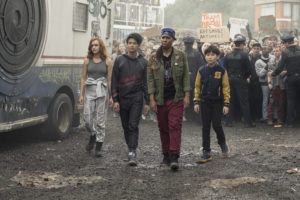 Wade ends up meeting Art3mis aka Samantha (Olivia Cooke) and finds that he is attracted to her (at least her avatar).  As the search continues to solve the puzzle Wade ends up teaming up Art3mis and 3 other players to find the puzzle.  The team reminds me a little bit of the kids in “Goonies”.

The movie makes quite a few refences to the 80’s (actually maybe hundreds).  In particular your will see the Back to the Future DeLorean in a lot of the scenes.  You will notice Goro from Mortal Kombat and a scene where Wade holds up a boombox similar to John Cusak in “Say Anything”.  Godzilla almost ends up destroying everyone.  The Atari 2600 plays a major role in the movie and you’ll notice Van Halen’s song “Jump” right away in the movie.

This is Speilberg’s funnest movie in years! Ready Player One will wow your visual senses!  If you like 80’s movies, music, culture you will thoroughly enjoy this movie. If you grew up in the 80’s you will relive a little of your childhood.  The movie leaves us with message, “the real world is real and the virtual world is not”.  Have a little fun.  “The Oasis Needs You”.