If you were a child of the 80’s or 90’s you might remember that there always seemed to be no shortage of action movies to watch. If you missed it at the theatre you’d go to the video store and rent it as soon as it came out. Nowadays video stores are scarce and there’s only so many videos you can fit in that big metal red box that sits in front of the 7-11. 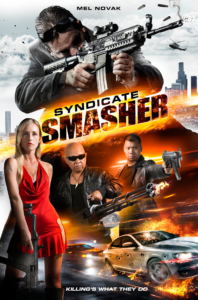 One movie that comes to mind is “Revenge of the Ninja” it was movie about a Ninja that turned bad and was terrorizing people in Los Angeles. They of course had to find another Ninja, to track down the bad guy, AKA “Shô Kosugi”. In the end we found out that the bad Ninja was someone very close to him (I won’t spoil it for you) played by Arthur Roberts. The movie never had slow moment.

While I was looking for movies to I recently ran across Syndicate Smasher which not only had Arthur Roberts, but also Mel Novak which sounded really familiar. So, I proceeded to look Mel up on IMDB and it turns that he was a villain in the last Bruce Lee movie called “Gamed of Death” and several other recent movies, that kind of looked like Action/Martial Arts movies.

Syndicate Smasher was recently released on Amazon prime so I decided to rent it and take a look. The movie starts with an EPIC gun battle in Serbia between two contract killers (Jon Miguel and Olya Lvova) that are hired to kill one bad guy. They end up having to fight an army. They are then rescued by none other than Mel Novak who plays “Milan”. 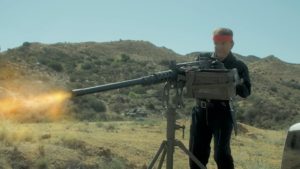 As the story progresses it takes an interesting turn as the cops played by (Joe Estevez, Laurene Landon and John Gumboc) figure out that there is plot (by Milan and his contract killers) which will result in a gang war all over the city. Little do we know the police chief played by Arthur Roberts is going to have something to say about this. The Mafia (the Italian mob), the Yakuza (Japanese mob), the Tongs (Chinese mob) and the Russian Mob start to wage a war against each other.

When the plot unravels and fake news is passed from gang to gang, assassinations start taking place between the rival gangs, reminiscent of “Year of the Dragon”. And if there wasn’t enough killing they introduce a Rambo type character (David Park) that causes bloodshed all over the place.

This movie never has a slow moment and has some very interesting and twisted characters. Syndicate Smasher appeals to the action movie, martial arts, and mob fans who miss the action and Rambo style movies. It’s the movie for the people who say “They don’t make action movies like they used to!”