As Close Encounters of Third Kind celebrates it’s 40th Anniversary it will return to theatres. The original film released in 1977 will be re-released in 4K with Steven Speilberg’s Director’s Cut. Starting September 1, 2017 it will run for one week in selected theatres.

After an encounter with U.F.O.s, a line worker feels undeniably drawn to an isolated area in the wilderness where something spectacular is about to happen.

Written and Directed by:
Steven Spielberg 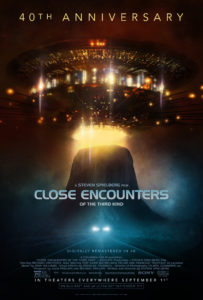