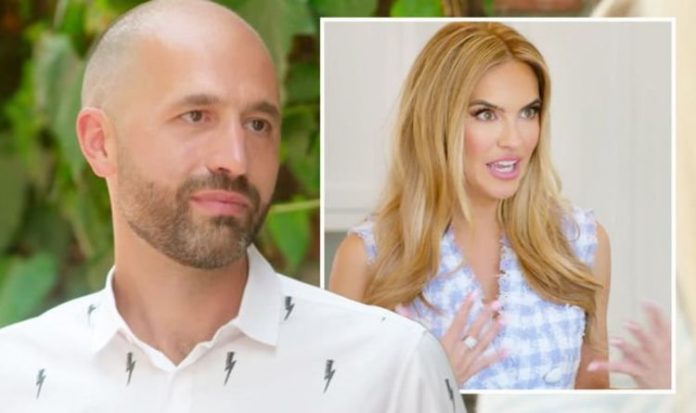 Selling Sunset season four premiered on Netflix with a bang this week as the agents at The Oppenheim Group returned to give viewers a peek inside some of the most luxurious properties Los Angeles, USA, has to offer. However, the series still had its fair share of drama, none least between Christine Quinn and the likes of Mary Fitzgerald, Heather Rae Young and Chrishell Stause. With years of bad blood between them, the relationships were left in tatters by the finale and while the agents had plenty of harsh words to say about one another, it was comments made by Christine’s husband Christian Richard which has sparked a backlash from viewers.

Christian’s comments came in episode nine of season four as new mum Christine contemplated her future at The Oppenheim Group.

With so much tension in the air and with a newborn to look after, Christine vented to her other half about how the other agents treat her poorly.

Beginning the conversation about a possible relocation, Christine asked Christian: “So have you been looking anymore at new houses in OC?”

“Yes,” Christian replied. “Prices are actually a lot higher than here in West Hollywood but I think it’s the most beautiful beach.”

READ MORE: Who is Christine Quinn and Emma Hernan’s ex-boyfriend?

“I think it’d be a beautiful weekend house for us,” he continued. “And it’s an hour away from where we live. It’s a no-brainer.”

Keen on the idea, Christine brought up how a home away from home would be ideal as she’s struggling with the atmosphere in the office.

“Plus, I’m just so fed up in the office,” she said before Christian asked what was happening.

Christine explained: “Every time I walk into work, they go out of their way to ignore me. People don’t realise how difficult it is to walk into a room of people who hate you.”

Christine then brought up a comment Heather had previously made: “You know the thing that really hurt me is Heather said, ‘Well, I hope that Christine becoming a mother, it’ll soften her’.”

After Christian joked he wanted the same, the two launched into a savage takedown of their co-stars and the “jealousy” they supposedly held towards Christine.

Supporting his wife, he went on: “Look at your life. Isn’t one of them divorced, like, dumped, basically? And thrown out, so like – here we are, happily married with our baby.

“Our weekend trips are, like, stuff that they’ll never do their entire life.”

Christine concluded the discussion by insisting she didn’t need to be in the office as she isn’t “desperate for attention” or “camaraderie”.

The pair then went on with their day while the likes of Chrishell, Mary, Emma and newcomers Emma Hernan and Vanessa Villela were shown enjoying time in the office.

However, a number of Selling Sunset fans took issue with Christian’s brutal “dumped” and “thrown out” comments aimed at Chrishell.

On Twitter, @LoveWhenever vented: “No but I didn’t know Christian can be that petty too. OMG. ‘Isn’t one divorced? Basically dumped’. Well, damn. I don’t like Chrishell either but that was mean. #SellingSunset.”

And @pmiller191 agreed: “#SellingSunset Christian is a rude, entitled POS for what he said about Chrishell. Also I would choose my words more carefully if I were him because trash talking someone for being ‘dumped, divorced and thrown out’ could come back to bite him in the ass if he ever gets divorced.”

Fellow viewer @HelloOvy claimed: “All this time I thought Christine was manipulating Christian who seems like this pushover but after hearing the comments he made about Chrishell’s divorce ‘thrown out’ ‘dumped’ & saying they’re jealous of their life like they’re both just bad people #SellingSunset.”

While @erin6475 echoed: “And then they (say) s**t the girls about how ‘they’re just jealous and they’re never gonna live as good of a life as we live’ THEN CHRISTIAN SPECIFICALLY CALLING OUT CHRISHELL SAYING SHE WAS DUMPED AND THROWN OUT?!

Selling Sunset seasons 1-4 are available to stream on Netflix now.