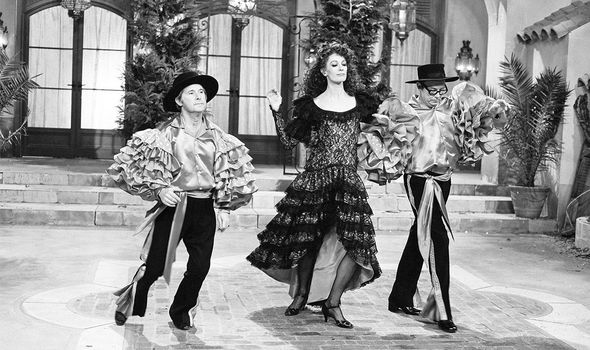 Morecambe and Wise — Eric Morecambe and Ernie Wise — were the iconic comedy double act who worked across most forms of broadcast in a career that spanned over 40 years. They were a hit in the UK, regularly touring the country up and down. Their greatest success came via television in which they would play-out their skits and ongoing inside jokes.

This weekend, Miranda Hart paid tribute to Morecambe, telling his story by retracing his steps and visiting the places he appeared with Wise in BBC Two’s, ‘My Hero’.

She met people who knew him and introduced the performances that made her want to enter the world of comedy.

The journey took her across Britain, from Wales where she spoke to Eddie Braben — the man behind many of Eric and Ernie’s most famous TV moments — to the Essex studio of the artist who painted the entertainer at the height of his fame.

While the pair were a hit, reports show that Morecambe feared that he and Wise’s success would fail.

Comedy: The pair were among some of the country’s favourite comedians (Image: GETTY)

Morecambe was always anxious the next show would be their last, according to Joane Bartholomew, his wife of 31 years.

Speaking ahead of the premier of the two long-lost episodes of Morecambe and Wise in 2018, she said: “It’s no wonder Eric had a heart attack.

“He was working so hard and taking so few breaks.

That night, he had taken part in a charity show, hosted by close friend and comedian Sten Stennett, at the Roses Theatre in Tewkesbury.

Bartholomew was in the crowd and noted he was “on top form”.

The show ended and he left the stage, only to rush back on to join the musicians, himself playing various instruments.

On leaving the stage for the final time, he stepped into the wings and collapsed with his third heart attack in 16 years.

He was rushed to Cheltenham General Hospital where he died just before 3am on May 28.

While the pair left an indelible mark on British comedy, not everyone initially believed in them.

Prior to their mainstream success, bosses at the BBC were not keen on Wise’s position after they received a script from them.

They preferred the idea of Morecambe ditching him and going solo as a comic, as was explored during ITV’s series ‘The Lost Tapes‘.

A letter to a scriptwriter dated June 5, 1959, written by one of the BBC’s comedy producers, John Ammonds, laid bare the broadcaster’s concerns.

He wrote: “After seeing Morecambe and Wise the other week in their show [in] Blackpool, I am not at all sure as to their strength on a TV programme.

“They are still working on old gags and in my opinion, frequently working the wrong type of material.

“They are quite a disappointment to me because when I first worked with them in this region on sound, I thought they had a great future.

“It is even more depressing than it seems because they are quite happy to jog along as they are doing at the moment.

Ernie Wise: A young comedian by the name of Ernie Wise performs in 1938 (Image: GETTY)

“I always thought Eric Morecambe was a funny man and still think that he could be very successful on vision but only if he could be detached from Ernie, who I think is a big weakness.

“I really cannot see them making the grade in a TV series.”

They proved the producer wrong, but their first foray into comedy did not go to plan.

Appearing in the 1954 BBC show ‘Running Wild’, their performance was widely criticised, with one reviewer concluding that the TV set was “the box they buried Morecambe and Wise in”.

Skits: Performing one of their famous skits during the Morecambe and Wise show (Image: GETTY)

Fearing that the show was a dead end, the two considered cutting their losses and quitting before it had had its run.

Frank Pope, their agent, even wrote to the head of light entertainment at the broadcasters, criticising Running Wild himself.

After this, the pair kept a tight control over their material, and in 1956 were offered a spot in the Winifred Atwell show with material written by Johnny Speight.

This proved a success, and marked the beginning of an illustrious career.

My Hero is available to watch on BBC iPlayer.

Eric Morecambe’s anxieties laid bare by widow: ‘No wonder he had heart attack’