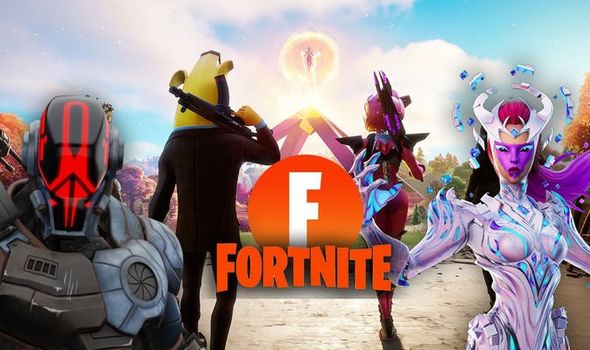 Everything you need to know about Fortnite end of Chapter 2 event (Image: EPIC GAMES)

Fortnite fans are counting down to the start of Chapter 3, Season 1. However, before Fortnite users can get stuck into a brand new season of content, Epic Games will hold an end of season event on PS5, PS4, Xbox Series X/S, Xbox One, PC, Nintendo Switch and Android. Titled ‘The End’, the event has a December 4 release date and a 9pm GMT start time. Because this is a one-time only experience, players have been warned to login 30 minutes before the start of the event (8.30pm UK time), or risk missing out. Leave it any later, and there’s a chance you won’t be able to login due to overloaded servers. Speaking of servers, the game is expected to go offline for extended maintenance immediately after the event, similar to the transition between Chapter 1 and Chapter 2. This sever maintenance period is expected to last until Monday, although this is yet to be confirmed. Oh, and if you need any extra V-Bucks for the next season’s Battle Pass, check out the link below.

Server warnings aside, Epic Games has confirmed that ‘The End’ will support parties of up to 16 people, which means you should be able to experience the festivities with most of your friends.

It’s also tipped to be the longest live event in Fortnite history, lasting for around 15 minutes.

If you need even more incentive to join in, Epic Games will reward players with a special Loading Screen and Wrap. You can also unlock 225,000 XP if you login before the end of the season.

As for the event itself, the large number of leaks, teasers and news reports have given fans a pretty good idea about what to expect.

‘The End’ sees players battle The Cube Queen, who is described as the “ultimate destroyer of all reality”.

Judging by Epic’s recent teaser trailer (below), the entire island could flip upside down to reveal a new map. Either that or The Cube Queen destroys it all with her lightning powers.

Undercover game files suggest players will fight at least one giant caretaker boss, potentially with old-school weapons from Fortnite’s past.

After months of speculation, Dwayne ‘The Rock’ Johnson has also seemingly confirmed his involvement in the end of season event/Chapter 3.

Johnson had previously been linked with the role of The Foundation, one of the key members of a storyline group known as The Seven.

In a video promoting ZOA Energy drinks, The Rock dropped countless hints and teasers about his casting as The Foundation.

The character’s helmet can be seen in the fridge containing ZOA Energy drinks, before the camera flips upside down like the island in the trailer.

While it’s possible it could all be a ruse to throw fans off the scent, it’s more likely that Dwayne Johnson will be part of the Fortnite universe.

You can see the video for yourself by hitting the play button below.

Late night grind, POWERED BY @zoaenergy������⚡️
ZOA delivers healthy energy when you get to that ZERO POINT so you’re always taking the HIGHER GROUND.
Because drinking ZOA, will always give you the strongest FOUNDATION in the UNIVERSE!
Sip your ZO, now LFG!!!! #ifyouknowyouknow ������ pic.twitter.com/admN7U9QKt

Other leaks have given fans a look at some of the new items, weapons and gameplay features coming to Chapter 3, Season 1.

Based on clues discovered by hardcore Fortnite fans, Epic Games could add throwing axes to Battle Royale. The twist, however, is that the throwing axes can be caught by opposing players, making it a somewhat risky weapon to use.

As previously reported, Epic Games appears to be working on a reworked version of the FlintKnock Pistol, complete with improved stats and new functions.

If a recent piece of Epic Games artwork is anything to go by, players will be able to use weapons while sliding. This new movement mechanic lets players slide on their knees while firing guns. You can see the sliding teaser artwork below.

Other new gameplay features include rideable animals, which can be tamed using the new Saddle item.

As for Chapter 3 skins, a video teaser by Donald Mustard features a new design for Agent Jones (above-left), who appears to be wearing prison gear. Could this be a Battle Pass skin?

Fans believe Spider-Man will be included as a Battle Pass reward, while Neo from The Matrix and Boba Fett from Star Wars are both tipped to appear in the Item Shop.

Needless to say, Chapter 3, Season 1 will launch with a new Battle Pass, complete with over 100 rewards. That’s on top of a redesigned HUD and menu screens, as well as a whole host of in-game challenges.

Express Online will keep this article updated with all the latest Fortnite developments, so stay tuned for more details.