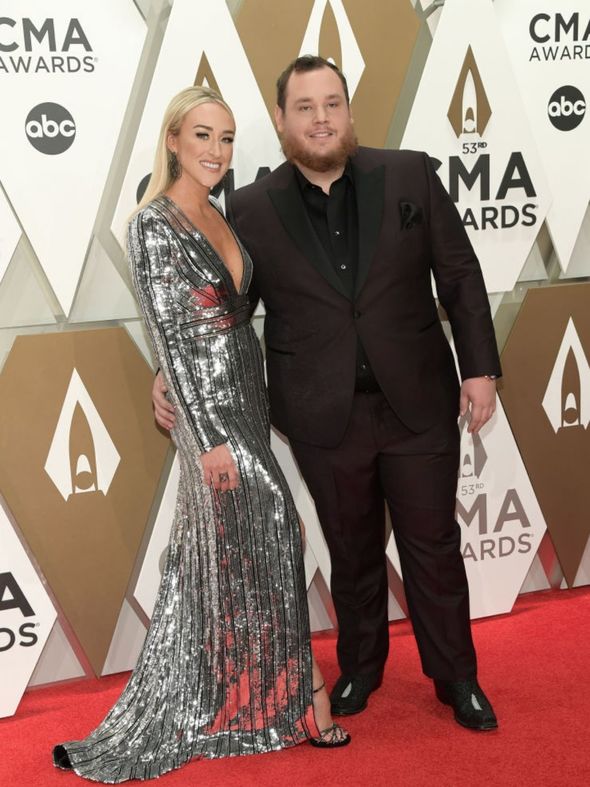 “I wanted to be a homicide detective,” Combs tells me in a voice as worn as Columbo’s raincoat. “I think it was the challenge of solving a puzzle that appealed to me. It’s a bit like writing a song, except that puzzle has no pieces – you make the pieces and put them together.

“I was majoring in criminal justice at Appalachian State University, but I was a pretty bad student.”

Luke, 31, dropped out of college with just 21 grade hours to do before he graduated. He’d been doing two jobs to support himself through Uni, working as a bouncer at the Town Tavern – the bar in Boone, North Carolina, that he lived above – and folding shirts at an Izod clothes store.

“I played my first show at the bar across the street, charging $1 a ticket and made $200 – more money than I made from both my jobs in a week,” he recalls. So Combs quit college to pursue his dream.

Moving to Nashville was a gamble. “My parents weren’t able to support me, so if I’d failed, I’d have been back in my childhood bedroom,” he says with a smile. “It was tough but I played anywhere that’d let me play and it turned into my job pretty quickly.”

Strong, original songs like Hurricane and his deep, rasping voice rapidly attracted fans. “It was a journey, but it was a lot faster than a lot of people’s,” says Luke who remains as down-to-earth as a moonshine still.

“There were a bunch of guys better than me, and a bunch of guys as good as me who haven’t had their chance. I put a lot of work into it and the stars aligned. I’m the lucky dude who got to be there. But I wasn’t a stereotypical artist, somebody had to take a chance on me.”

He released two indie EPs in 2014, followed by his first single, Hurricane.

Sony signed him, Hurricane was re-released by Columbia Nashville and topped the country airplay charts in May 2017, reaching 31 in the pop chart.

His debut album, This One’s For You went triple platinum; the follow-up, 2019’s What You See Is What You Get topped the US charts.

Multiple awards, Grammy nominations and around three billion streams ensued. In August, he won Entertainer Of The Year at the prestigious CMA Awards.

Luke’s rise has been meteoric. He has sold out arenas in every state in the USA, and been inducted into the Grand Ole Opry. He even has his own customised camouflage crocs, with a beer bottle opener attached, and red elements to reflect his bushy russet-brown beard and hair.

But ever humble, he tells me “I just got lucky I guess – right place, right time, right songs.

“The album’s success was beyond my wildest dreams. I put a lot of work in and a lot of great people worked on it, it was a group effort.”

North Carolina-born Combs, who hadn’t stepped foot on an airplane until he was 25, has now done three tours in Europe and two in Australia. He was due to headline the UK’s C2C festival when the pandemic panic closed everything down in 2020. He will finally top the bill at the Glasgow Hydro on March 11, Dublin’s 3 Arena (12th) and London’s 02 (13th).

“I can’t wait,” he says. “UK crowds are amazing. I hope you keep listening.”

In lockdown, he live-streamed from his home in rural Tennessee, showcasing new songs and performing covers including Tracy Chapman’s Fast Car.

“Live-streaming is good, man and it’s better than nothing, but it’s not like paying in front of a real crowd. I couldn’t wait to get back to live shows last Summer.”

Combs used his unexpected lay-off to marry his Florida-born fiancée, country singer Nicole Hocking, 28. “We met through mutual friends. I’m so glad we did. Getting married was awesome. That was the upside of not working, we got to spend so much time together, doing normal things.

“I cooked every day. We’ve got chickens, we planted a garden, we worked on different projects around the house. I went turkey hunting, played Call Of Duty…” He pauses and laughs, “I was living the redneck dream.”

Their only marital problem is his disconcerting habit of chewing with his mouth open, which drives Nicole to distraction. “I’m working on it, making progress…”

Combs says he’s been singing since he could talk, and fondly recalls “singing on the porch with my parents and uncles, then at high school, I sang in front of strangers at Carnegie Hall…singing was something I always did.

“I had to get used to playing guitar in public, but after a year or so it was fine. I enjoyed the energy.”

His mother Rhonda worked at bank; his father Chester was a maintenance man. Luke remembers singing Vince Gill songs with his mum when he was seven. In his teens, though, he listened to “lots of Nirvana, The Clash, Biggie Smalls…listening to everything really helped me get a different perspective.”

Combs reconnected with country in his late teens. He rates Brooks & Dunn, aspires to have Garth Brooks and Eric Church’s “energy and presence on stage” and praises John Anderson’s latest album, Years.

“My buddy Drew Parker just signed his deal,” he beams. “He’ll do some really great things. Ray Fulcher, who I work with, just got a deal, their time is coming.”

Luke’s live shows pack in thirty-plus songs, and last up to two hours.

At 5ft 8in and nearly fifteen and a half stone, Combs has wrestled with his weight and is open about the OCD that has dogged him since his teens, causing him to repeat thoughts over and over. “It could be something about my health,” he says. “Am I about to have a stroke, or whatever? It becomes obsessive, and you can never have an answer, but I’ve taught myself to be comfortable with that and it’s a lot better than it was. It was tough but it does get better.”

Although praised for co-writing modern country classics like Beer Never Broke My Heart and She Got The Best Of Me, Luke admits some of his early songs were “terrible, but I still put them out”. The writing process is his way of “getting stuff of my chest”.

Now he tries to be “no different now than I was when I got here. I have the same friends, work with the same people…Being a good person translates into having a successful career.

“Keith Urban and Carrie Underwood are great folks too. I want people to be able say, ‘I met Luke Combs five years ago and I met him now and he’s still the same guy’.”

Luke’s latest single Doin’ This sums him up. “It’s about playing country music with my buddies in the band for a crowd, whether that’s 70 people or 70,000 people. It really doesn’t matter how many people we’re playing for because it isn’t about the fame, the fortune, the name, or the glory. It’s about getting to make and play country music.”