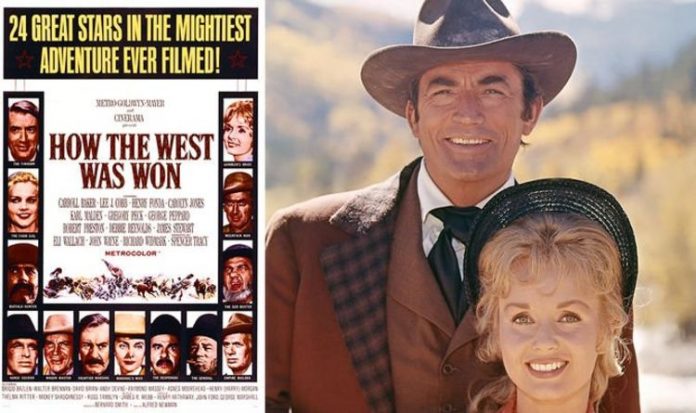 Back in 1962, MGM released its biggest Western yet, helmed by three directors in Henry Hathaway, John Ford and George Marshall. How the West Was Won had an ensemble cast of no less than 24 stars in a lengthy blockbuster of five parts, set over 50 years, and captured on three-lens Cinerama for projection on enormous curved screens. The huge hit saw widespread critical claim and eight Oscar nominations but almost lost its ending that actually showed how the West was won.

One of the Western’s biggest difficulties was having three directors in Henry Hathaway, John Ford and Marshall.

Ford, who helmed the American Civil War scene with a cameo from John Wayne as General Sherman, complained about having to dress the huge sets, struggling with the Cinerama filming process since it meant for much wider shots than the standard single-camera way of shooting he was used to.

Hathaway, who directed three of five chapters was quoted as saying: “That damned Cinerama. Do you know a waist-shot is as close as you can get with that thing?”

This way of shooting also meant the actors had to be captured artificially and out of sync with each other. It was only when the three-print Cinerama process was projected onto curved screens that the characters would synchronise.

Hathaway, who later directed Wayne in Duke’s only Oscar-win, True Grit, later admitted that making How the West Was Won was a “goddamn trouble”.

According to Ronald L Davis’ Just Making Movies: “They had an idiot for a producer and Sol Siegel was drunk most of the time. We spent so much money on the picture they almost decided not to do the last part. We had a meeting, and I said, ‘You can’t quit. You’ve got to show how the West was won. The West was won when the law took over.’”

But these weren’t the only issues that the epic Hollywood epic faced during its production.

How the West War Won’s stuntman Bob Morgan, who was the husband of Yvonne De Carlo, was so badly injured that he lost a leg and almost died.

When filming The Outlaws segment towards the end of the movie, a gunfight takes place on a moving locomotive between a US marshal and a group of train robbers.

Morgan was doubling for the marshal and had to hold onto a log, swaying between two flatcars – one of which was carrying several tons of timber.

Tragically, the chains holding these logs together snapped and the stuntman was crushed under the falling timber.

Being so badly hurt, Morgan took five years to recover. With her husband permanently crippled, De Carlo sought whatever jobs she could, even appearing in nightclub acts across the country. But then Wayne himself stepped in.

Wayne helped out by offering her the supporting role of Louise Warren, the title character’s cook in 1963’s McLintock, with him.

On a lighter note, when filming the American Civil War segment, George Peppard’s character thought back to his late father who was played by James Stewart earlier on in How the West Was Won.

He improvised an impression of Jimmie’s voice, which at first director Ford objected to. However, Peppard pushed for the scene, feeling it would help the audience remember which character his dad was supposed to be.

How the West Was Won’s ‘idiot drunk’ producer, near-death and fight to complete the epic