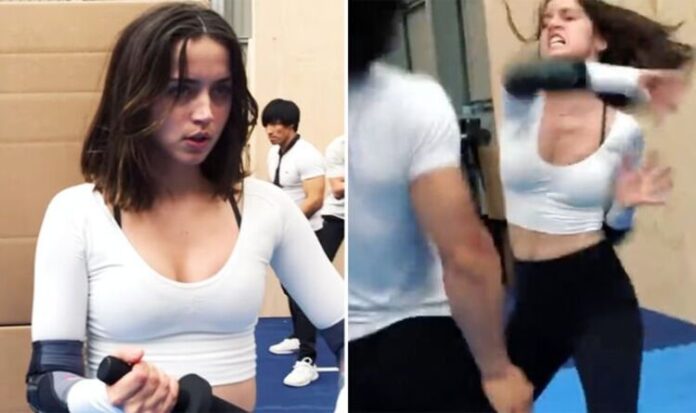 She may only have had a small role in No Time To Die, but Ana de Armas’ turn as Paloma received much praise from James Bond fans. Her rookie CIA agent helped Daniel Craig’s 007 fight off Spectre agents in Cuba, but sadly didn’t return for further scenes, having been added later in production after working with the lead on Knives Out. Nevertheless, the 33-year-old beauty left her mark as a Bond girl and has now shared some behind-the-scenes pictures and videos.

Ana wrote on Instagram: “I’m in the middle of night shoots now and I just remembered those 007 sleepy, cold rainy nights! …found a video of rehearsals too… I had so much fun with Paloma tho!”

The Cuban-Spanish star shared a couple of selfies on set in costume along with a picture of the Pinewood Studios Bond set.

The highlight of the post had to be her incredible fight training in which she takes on several “armed” men.

Before No Time To Die’s release, she opened up on Paloma’s role opposite Bond to Express.co.uk.

As for Blonde, it’s a fictionalised biopic of Marilyn Monroe, with Ana in the starring role.

The upcoming Netflix movie is based on Joyce Carol Oates’ novel of the same name.

Deep Water hits Amazon Prime this Friday, while The Gray Man and Blonde arrive on Netflix later this year.