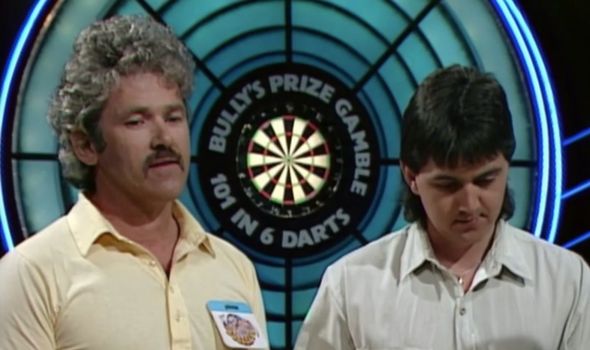 John Cooper was released on parole in 2006 after serving eight years for a botched robbery. Cooper, who already had a history of burglaries and violent assault, was on the radar of a covert group called “Operation Ottawa”. Led by Detective Steve Wilkins, the group had reopened a cold case from the Eighties and Nineties: a string of unsolved double murders in the Pembrokeshire area.

Cooper was their main suspect.

It took them two years of collating witness statements and scrutinising thousands of old exhibits before the Ottawa team were convinced that the same person was responsible for all three crimes.

In 1984, Cooper had tied-up brother and sister Richard and Helen Thomas in their manor home, shot them at point-blank range and burned down their house.

Four years later, in May 1989, he appeared on the popular game show, Bullseye, reaching the final with another contestant.

Pembrokeshire Murders: John Cooper could be seen playing darts from within his prison cell (Image: ITV)

Just weeks after this Cooper committed another double murder: husband and wife Peter and Gwenda Dixon were walking along Pembrokeshire’s National Coastal Path when Cooper tied them up, demanded they hand over their bank cards, PINs and cash, and shot them in the face with his sawn-off shotgun.

Things didn’t stop there: In 1994, he cornered a group of teenagers behind the Mount Estate in Milford Haven, sexually assaulting a 15-year-old girl, raping a 16-year-old.

When all three unsolved cases were reopened in 2006, Detective Wilkins knew they had to be linked.

Not only were the crimes in the same geographical locations Cooper had operated his burglaries in, they all, in one way or another, had the signature mark of a single perpetrator.

It is Mr Wilkins’ and his team’s efforts that have been chronicled in ITV’s, ‘The Pembrokeshire Murders’.

Creative licence in true-crime stories is usually a given.

When we first see Cooper – played by Keith Allen – in his cell, he is throwing darts at a dart board.

UK crime: Cooper at one point attempted to pin the blame onto his son, Andrew (Image: BBC/Crime Watch)

Dylan Rhys Jones, the former defence solicitor of the notorious North Wales serial killer, Peter Moore, told Express.co.uk that it was an obvious link with the Bullseye story.

However, he explained that any suggestion inmates could or can have such personal benefits is misinformed.

Mr Rhys Jones explained: “Inmates earn privileges for good behaviour and it is possible that the availability of darts in a games room or a common area on a prison wing, and the right to play, would be a privilege earned by an inmate.

“And we did hear that Cooper had an unblemished record in prison.

“On the other hand I would expect that having a dart-board in one’s cell would not be acceptable.”

It runs in stark contrast to what lead actor Luke Evans, who plays Mr Wilkins, told ITV’s ‘This Morning’ ahead of the first episode.

Talking to Phil and Holly, he said the programme “didn’t need to be dramatised” as the cold case was “enough to put the fear of God into the team”.

Mr Evans added: “To catch Cooper in the way the team did is such an achievement.

“The drama explains how there were flaws in the investigation.

“The clock was ticking in a terrifying way when he was released on parole in 2006, so everyone was concerned.

“Everyone knew deep down that Cooper was the killer, it was just finding the evidence to prove it.”

By 2009, after gathering all the available evidence, detectives were under the cosh.

Cooper was set to be let out early from his 14-year sentence; and in January 2009, he left prison a free man.

Less than three months into his release, Cooper was re-arrested by the group in a dramatic street-side sting, in which Cooper “kicked off”.

Shortly after, when police searched Cooper’s car, newly bought rope and gloves were found – pointing towards his potential plans to commit yet more murders, so claimed Crime and Investigation.

Despite pleading his innocence, he was found guilty of the two double murders.

Cooper remains in prison in an “undisclosed” location.

The Pembrokeshire Murders continues tonight at 9pm on ITV.