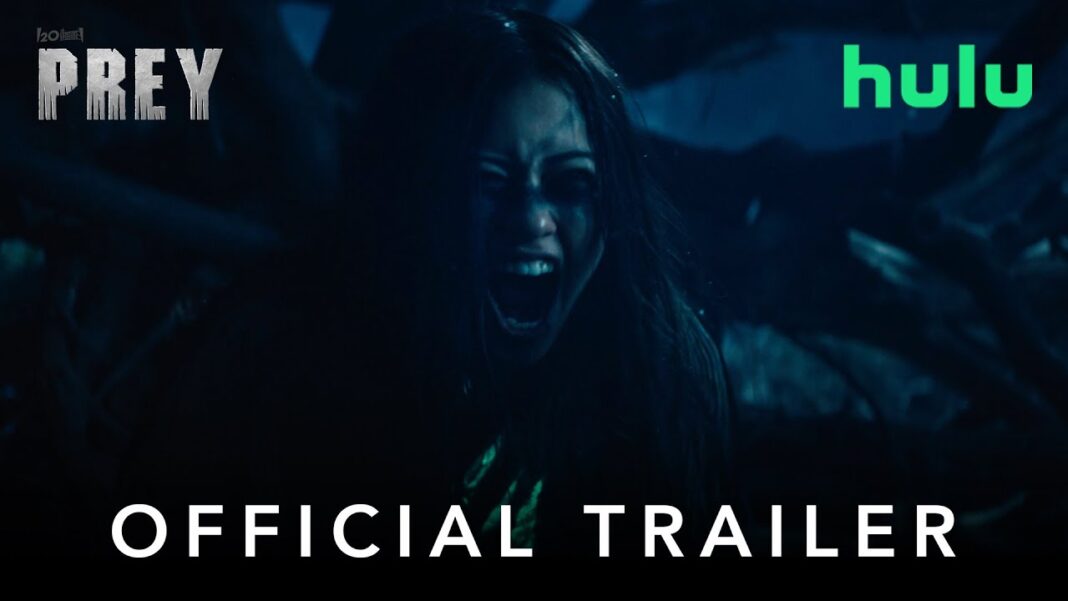 The premiere event of PREY in Los Angeles hosted a mainly Indigenous Hollywood audience, and now streams on Hulu for the general public – enjoying an opening weekend with more viewing hours ever watched in Hulu’s history of TV series and movies.

A film in both English and the Comanche Nation’s native language, the casting of the captivating lead is perhaps one of its biggest victories of all… Amber Midthunder had us at EYES.

Midthunder plays “Naru”, a young Comanche tribe member. Set in 1719, Naru leads us through her journey as she believes she is ready for kuhtaamia – to hunt something that is hunting you.

She is accompanied by her devoted canine companion, Sarii (Coco the Carolina dog, apparently not a movie dog – but heartfully loyal and scene stealing). Naru is the younger sister of “Taabe” (newcomer Dakota Beavers), the adept hunter and just-promoted Comanche War Chief. He recognizes Naru for her skills in tracking, but insists that she stay in the village after she is unable to complete and kill the hunt. She could not “bring it home”.

In spite of her brother, Naru and Sarii set out alone to find the menacing presence that only she is aware of.

Unbeknownst to all – the Predator has landed in the Great Plains and hunts, for sport, anything it perceives as another predator.

Naru proves extraordinary in her powers of observation, medicine, and tracking. Additionally, she is industrious – wielding her tomahawk efficiently and effectively at the end of a rope, while honing her warrior skills and agility to rival any of Marvel’s Black Widows.  It is important to note: the film never treats Naru as delicate, as she punches (and gets punched… often in the face), bites, and is dragged, kicked, and knocked about like any worthy fist-wielding action hero.

Remember kuhtaamia?  Naru’s mother (dignified Michelle Thrush) wisely reveals that kuhtaamia is not about the hunt, but rather “to survive”. Naru embraces that her greatest quality is her ability to survive as she realizes – “I am not a threat. That’s what makes me dangerous.”  This epiphany prepares her to finally face off with the Predator, brilliantly using his own tactics and weaponry against him.

Two worlds collide as sci-fi successfully meets slice-of-Indigenous-life. Not only are viewers treated to 1700s Comanche culture, an earlier version of Predator (transformed by Dane DiLiegro, in a more carnal alien take on the 80s metallic gadget killer), and a chuckle-worthy scene where a group of boorish French traders are made to stop and reload their single-shot muskets. (Note: the audience never sees English subtitles for the French traders… this is Naru’s story.)

While the original 1987 film was a fun romp about big men and big guns, PREY takes a different and equally entertaining approach as the skilled Comanche tribal members use their culture, the land, and their understanding of nature to kill a predator.  Brother Taabe is awarded the line, “If it bleeds, we can kill it.” (Pause for uproarious audience cheering.)

Easter eggs have been cleverly planted by director Dan Trachtenberg (10 CLOVERFIELD LANE) as homages are subtle and effective (but never quippy). Sweeping cinematography, epic and majestic scoring, impressive stunt choreography, and a clever sound design all make this film a slam dunk.

One questions the decision to release directly to streaming, as PREY would undoubtedly have been a success at the box office. Could there still be a theatrical release? Audiences deserve to see this win on the big screen. Now that would “bring it home”.

PREY – available on Hulu for streaming.  Also available, dubbed in Comanche *by the original cast*!!