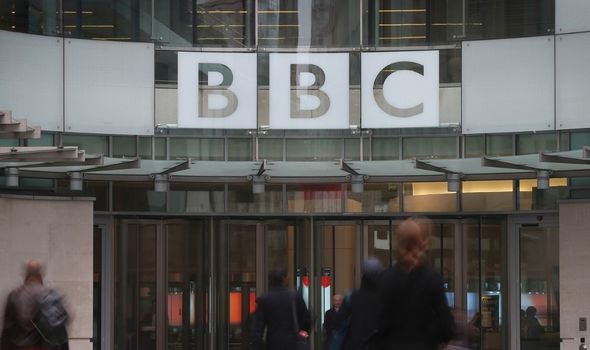 This Week: Simon McCoy walks off with bottle of wine in 2019

Simon sensationally quit BBC News after nearly 18 years with the broadcaster, confirming he would be joining GB News and have an afternoon programme. The news has shocked viewers, as Simon had become a much loved presenter on the BBC, known for his brilliant jokes, and his hilarious broadcasts, particularly about the royals. News emerged of his resignation after BBC News’ floor manager, Niall Jackson, wrote on Twitter it was Simon’s “final week”, with a spokesperson for the broadcaster confirming it was the 59-year-old’s last day on Thursday.

But before his dramatic resignation, his new colleague Andrew once made a quip after Simon walked off while presenting a segment on the BBC’s former show This Week.

Simon channelled his inner Ron Burgundy, a news anchor from the iconic Will Ferrell film Anchorman, as he read out a series of reports on This Week.

It had recently been confirmed This Week, which was a much loved late-night news show, would be coming to an end after Andrew announced he was leaving the programme.

In the satirical segment, Simon began talking about how he was “very excited to tell you the Royal Family celebrated the 50th anniversary of the Prince of Wales investiture at Buckingham Palace this week”.

He claimed the show was “thrilled to have these lovely pictures for you”, before being seen to rip up a piece of paper and turn his back to the camera.

And in a huge reference to a hilarious scene where Ron reads exactly what is on his autocue, Simon continued: “Well, that’s it for me, it just remains for me to say go f… I mean, stay classy San Diego.

“Nice try team, I just don’t read it because it’s there you know.

“Anyway, I am a professional k**b, I hear there is a late night TV slot soon to be on offer.

JUST IN: Simon McCoy’s brutal snub to royal baby: ‘Not sure this is news’

Simon McCoy pretending to drink the wine in the clip (Image: BBC)

“I quite fancy that.”

As he got out of his chair and walked away from his desk, Simon grabbed a bottle of wine and began pretending to drink it on set.

Following the segment on the show, Andrew said in 2019: “Simon McCoy, I am sure the BBC knows what it is doing.”

More recently, tributes have been paid to Simon after the announcement he was moving away from the BBC.

Andrew Neil is the founder of GB News (Image: GETTY)

Sam Taylor, head of live and breaking for BBC News, described Simon as a “sharp, funny and a great colleague”, adding to Express.co.uk: “We’ll miss his one-liners, pregnant pauses and commitment to breaking news in every form, and wish him the very best for the future.”

Andrew himself, who is the founder of GB News, said Simon’s move was “another great hire”, while John McAndrew – director of news and programmes – concluded: “Simon’s journalistic integrity, warmth and personality is a perfect fit for what we’re doing at GB News.

“He’s a brilliant journalist with an exceptional ability to relate to people in an upbeat way so we’re keen to get him out from behind a desk and talking to people from all parts of the United Kingdom.”

Meteorologist at the BBC, Matt Taylor, also expressed his disappointment at the departure.

Beginning his career at the Fleet Street News Agency as a reporter, Simon moved over to Thames Television to start work as a researcher.

When Sky launched in 1989, Simon was employed as a producer and reporter, before making the move as the channel’s royal correspondent for five years.

Simon has since appeared on various programmes including BBC News 24, BBC Breakfast and Afternoon Live.