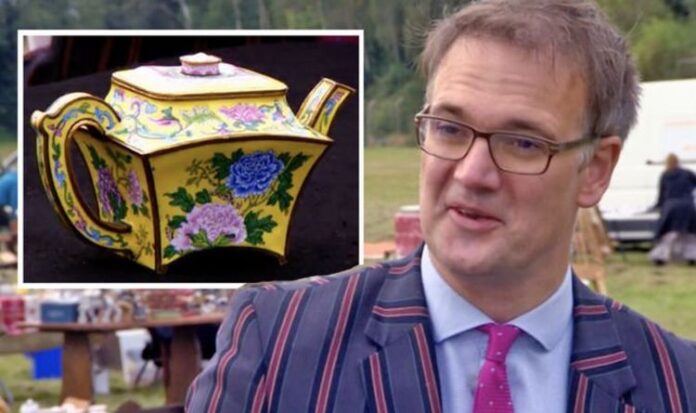 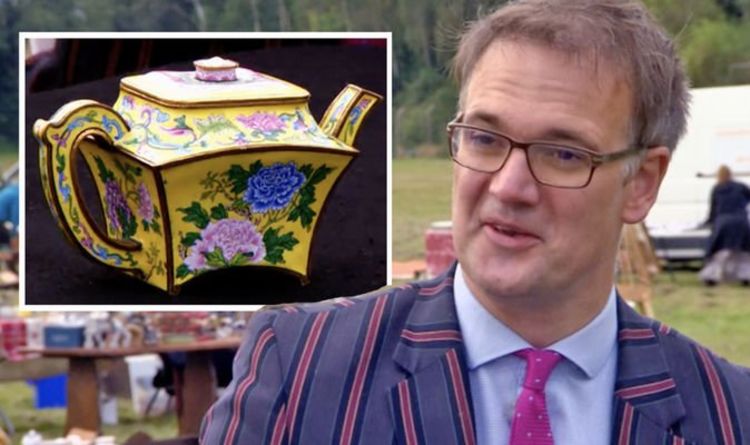 Bargain Hunt expert Charles Hanson made history last year when a tiny “teapot” found during a lockdown clear-out was sold for £390,000 at auction. Presenter Natasha Raskin Sharp had the pleasure of chatting to Charles about the incredible find and the biddings that went on in the auction room.

Natasha introduced: “Now, for people who come to fairs like this, and that includes many of your Bargain Hunters, the idea of making a lucky find is part of the thrill for shopping for antiques.

“And the same goes when you visit an auction house, a charity shop or even when you rummage around in a garage or a loft.

“Of course, valuable items aren’t found every day but our next story might just restore your faith that hidden gems are out there.

“I’m joined now by auctioneer Charles Hanson who has brought something rather special for us to peruse,” she continued.

“Charles, at first glance, a wee teapot, but what exactly is it?”

“It’s amazing, I think this is the ultimate Bargain Hunt find; our client came into the saleroom with a bag for charity but then this came out and he said ‘Is it worth anything?’” Charles replied.

“And what we’ve got here Natasha is a [teapot] and it would’ve been a ceremonial [teapot] used by the court of Emperor Qianlong in the 18th century.

“So it’s an imperial piece of enamel on copper, with that imperial yellow ground, very sacred, very important and very rare.”

“Take us back to the time it was crafted,” Natasha asked and the expert replied: “Emperor Qianlong who was that great Emperor of the Arts, he wanted his Beijing enamelist to make the very best. And the quality is simply out of this world.

“This is one of only three known, one’s in a museum in Taiwan, one’s in the museum of Beijing, China, and out of humble Burton-Upon-Trent, voila! unbelievably we have another.”

“Before we get to the estimate, where has it been for the last 250 years?” The presenter questioned.

Charles said: “Unbeknown to the owner, it had been in his house in his loft for over 50 years, his grandfather, Ronald, was in Japan in the mid-1940s and it came home and it just languished.”

“It stands out magnificently against this black here, but when it’s surrounded by other items, was it as equally eye-catching?” Those watching at home saw Natasha wonder.

“I’m sure you’ll expect international bidding for this piece, probably from the far East?” Natasha remarked and Charles explained: “I think you’re right, it’s probably what Faberge is to Russians and what imperial enamel is to Chinese billionaires and this to me, is a must-have object for any important Chinese connoisseur wishing to buy the best of Emperor Qianlong’s treasures.

“This object for me, is in its historical placement, the most important object I’ve ever sold.”

“Does that make you a little hot under the collar knowing you’re the one [selling it]?” Natasha wanted to know and Charles replied: “We can handle something so important, definitely.”

The clip then showed what happened in the auction room when the teapot went to be sold.

“The bidding I opened at £100,000, it was quite sturdy, we had nine phone bidders in China and all across the globe and off we went for the first two and a half minutes, bidding stuck at £100,000,” Charles explained.

“Longest two and a half minutes of your life?” Natasha wondered.

“And when it hit a quarter of a million, I was ‘thank you’. I felt relief, of course, it was my first big milestone.

“One thing I felt, I felt relief; all of my team gave me a huge round of applause and I said ‘thank you guys, we made a memory.’”