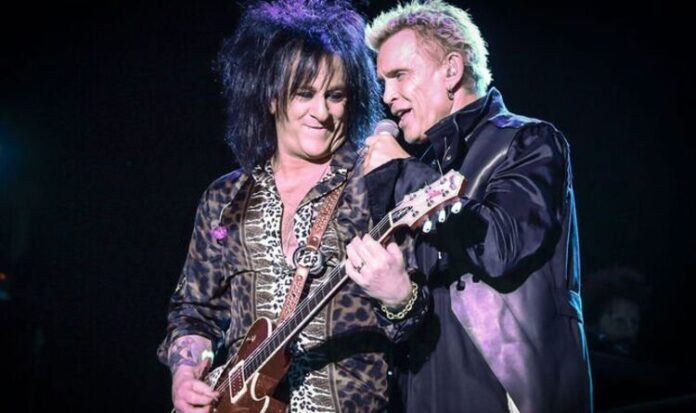 Stevens is regarded as a rock legend. As if being Idol’s long-term musical partner for forty years isn’t enough, he is the man (and fingers) behind that epic riff on Michael Jackson’s Dirty Diana. He also won a Grammy for his guitar work on the Top Gun Anthem from the 1986 film’s soundtrack. Yet, even he admits that his whole career has been overshadowed by a child’s toy. The 62-year-old spoke openly about how that unique rock moment was created and how he really feels about it all those years later.

Stevens has worked with Idol and appeared on six of his eight albums since the singer’s 1982’s self-titled debut. The guitarist co-wrote every track on the follow-up album, Rebel Yell, except Catch My Fall. This, of course, includes the iconic title track.

In a recent interview Stevens talks about how he realised he needed to bring something unique to the main, midway guitar riff, and how he found inspiration in his father’s basement.

He told the SDR Show: “My dad was pretty hip. He loved to tinker with electronics and had a great little workshop in the basement and I think that translated to my wanting to explore the sound of the guitar rather than just being proficient in the instrument.”

Years later, Stevens’ love of technology and improvisation lead to an iconic rock moment: “It was no mystery to us that when we were working on ‘Rebel Yell’, we [knew we] had a winner. And we were at Electric Lady Studios, which was, you know, the house that Jimi Hendrix built. And I had an incredible engineer, Dave Wittman, who had recorded the Kiss records and Led Zeppelin ‘Houses of the Holy’ and so I had all this stuff out at my disposal.

“And when it came to ‘Rebel Yell’, I knew that that guitar solo had to be more than just a bunch of notes and I was looking for some sort of effect and some sort of way to like, end the solo with a whiz-bang kind of thing.”

Stevens added: “I used to collect these Made-in-China ray guns and toys and little robots and stuff. As luck would have it, I was watching TV one night with my little guitar and practice happened. I’m playing this ray gun and I hear it through the amp. It’s like when one of those light bulbs go off: ‘Aah! I might have something.'”

It immediately became a phenomenon and has remained a central moment in their stage shows many decades later.

Stevens laughed as he said: “Now it’s become like a tradition… Billy presents me with the Ray Gun… It’s like, I’ve practised 50 years, my whole life to become technically proficient and my career comes down to pulling the trigger on a toy ray gun.”

WATCH THE FULL INTERVIEW BELOW (REBEL YELL SEGMENT FROM 9 MINUTES)

Apparently, Stevens has to tinker with the ray guns and solder them to get the required sound, and only classic toys from the 1970s are suitable. So he has a stockpile at home for use at concerts. Although, fans can also buy modified ones from his website.

Stevens also confirms the iconic story that Idol got the album and title name the name from the Rebel Yell brand of bourbon he was served at a Rolling Stones party.