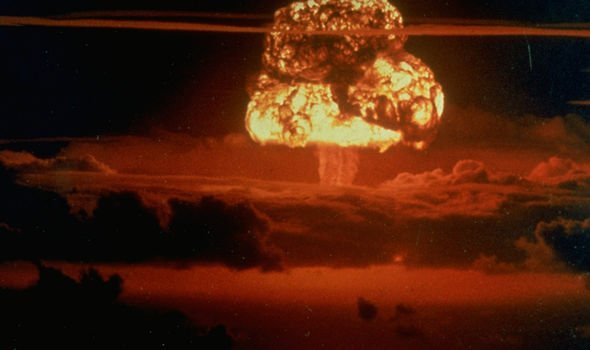 Activision’s game, which is available on both Xbox and Playstation consoles, as well as PC, takes the player back to the bitter tussles of the Cold War – where the Soviet Union and the US came within touching distance of a nuclear catastrophe. Its campaign mode follows CIA officer Russell Adler as he pursues an alleged Soviet spy, Perseus, whose stated goal is to subvert the US and tilt the balance of power towards the USSR. In the trailer of the game, former US President Ronald Reagan orders the player to undertake a covert mission in order to “save the free world”.

It features a discussion on finding and eliminating Perseus before he spills his secrets, in a move that Mr Adler says “will shift the balance of the Cold War”.

Then, Mr Reagan shows up, demanding to “give Mr Adler whatever he wants,” to complete his mission, adding: “You’ve been given a great task, protecting our very way of life from a great evil.”

But while that threat was real, Perseus was not the full picture.

The codename was given to a hypothetical atomic spy said to have breached US national security by infiltrating Los Alamos National Laboratory during the development of the Manhattan Project.

The new game was released this morning (Image: GETTY)

During the research and development programme, run between the US and the UK to produce the first nuclear weapons, intelligence services uncovered a number of cases of espionage work – most famously Klaus Fuchs – through the Venona project.

In 1995, the CIA declassified documents showing they had identified three Soviet agents, adding Theodore Hall and David Greenglass to the list.

The documents added: “Some students of Soviet atomic espionage have believed in the existence of a fourth unidentified Soviet spy at Los Alamos, codenamed Perseus’.”

This belief is based on memoirs of KGB officers published in the early Nineties.

But with the opening of the Venona decryptions in 1995, it was revealed that Perseus was “a Soviet intelligence disinformation operation to protect Theodore Hall, then still alive but not publicly exposed as a Soviet spy”.

The game focuses on the Cold War (Image: ACTIVISION)

It added: “The fake Perseus was given characteristics that did not fit Hall. There was no Perseus.”

But that was not the end of the story.

While there was no Perseus, there was a fourth Soviet spy at Los Alamos.

For seven decades the identity of this spy was buried in the FBI’s investigative files but was recently declassified.

Documents revealed Oscar Seborer was the fourth spy and therefore the real threat to the future of the Cold War.

They revealed: “The FBI has known since 1955 that Oscar, his brother Stuart, Stuart’s wife Miriam, and Miriam’s mother all secretly defected to the Soviet bloc in 1952, living initially in East Germany but then moving to Moscow.

The Manhattan Project commenced towards the end of the war (Image: GETTY)

Klaus Fuchs is one of the most famous atomic spies (Image: WIKI)

“The brothers never returned from Moscow, but remarkably Miriam, by then divorced from Stuart, returned to the US with her son (born in East Germany) and her mother in 1969, at the height of the Cold War.”

The story of Oscar Seborer’s atomic espionage is found in a few dozen pages of FBI files released in 2011.

The rest came from partially released FBI files on the pair that document Operation SOLO, the codename for the FBI’s recruitment and direction of two communist brothers, Morris and Jack Childs, as informants inside the senior leadership of the Communist Party USA, (CPUSA).

US codebreakers found the Manhattan Project had been penetrated by four Soviet spies in total, who gave it the codename “Enormous,” but there could have been more.

Historians generally agree that the Soviet Union achieved its great leaps in its atomic programme by the espionage information and technical data obtained by these four spies.

It needed spies who had security clearance high enough to have access to classified information at the Manhattan Project and who could understand and interpret what they were stealing.

The Soviet nuclear programme would have eventually been able to develop a nuclear weapon without the aid of espionage, but the spies helped speed up the process greatly.

Thankfully, neither side would use their weapons of mass destruction on each other.