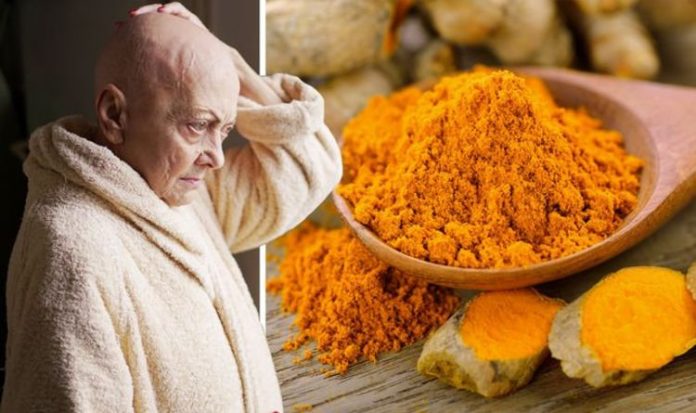 Cancer is the eventual outcome of the uncontrolled proliferation of cells that spread to different parts of the body. The malignancy is believed to affect one in every two people born in the UK after 1960, over the course of their lifetime. Protecting oneself against the disease involves abiding by a set of dietary rules. Curcumin – the active ingredient in turmeric – could help lower the risk of cancer and thwart tumour growth when administered in conjunction with other medication.

Some vegetables boast particularly potent medicinal properties due to their inimitable nutritional profile.

Turmeric is famed for purported medicinal properties, with Ayurvedic literature supporting its use as an antiviral.

According to Cancer Research UK, turmeric is promoted as an alternative cancer treatment due to its exceptionally high concentrations of antioxidants.

The health body says: “There is some evidence that curcumin, a substance in turmeric, can kill cancer cells in certain cancers.

Research has shown lower rates of the disease in countries where turmeric is widely consumed.

The anti-cancerous properties of the Asian root vegetable have been put down to its ability to reduce swelling and inflammation.

One published case report explored the benefits of curcumin on a patient with Adenoid cystic carcinoma, a relatively rare form of cancer that commonly develops in the salivary glands or other regions of the head and neck.

According to the Specialist Pharmacy Service, turmeric can be taken orally to treat or prevent a host of ailments including diabetes, high cholesterol and Alzheimer’s disease.

“When taken as a medicine, a common dose of turmeric is 400 to 600 mg three times a day, which is equivalent to 60 grams of fresh turmeric root or 15 grams of turmeric powder,” explains the health body. “Giving curcumin with piperine (a constituent of pepper) enhances the absorption of curcumin.”

However, when consumed in large doses, turmeric has the potential to upset stomachs, cause acid reflux, diarrhoea, dizziness and headaches.

Cancer: The superfood that ‘kills’ cancerous cells and helps reduce tumour growth by 80%

Vitamin B12 deficiency: The many facial signs indicating your levels are...