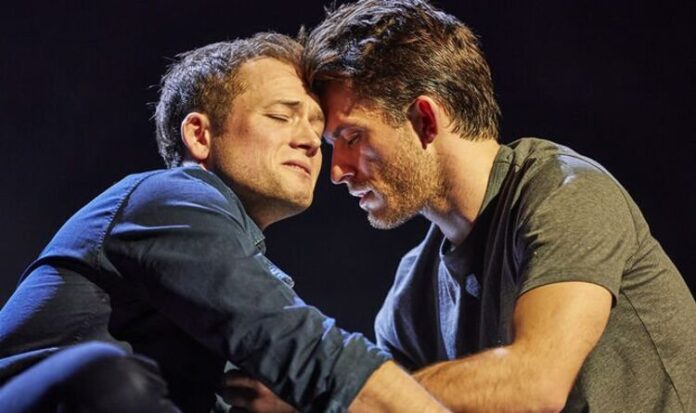 Bailey’s career is set to go stratospheric with a wet shirt ‘Colin Firth moment’, as his Bridgerton brother Anthony takes centre stage in the second series of the Netflix smash. Treading the actual West End boards, he already has impressive previous form, deservedly winning an Olivier for his incandescent turn as the wedding-shy Jamie in Sondheim’s Company. This time he’s paired with Rocketman and Kingsmen leading man Egerton in the 2009 tragi-comedy about personal and sexual identity from Dr Foster writer Mike Bartlett. It was a truly exciting prospect that rather failed to deliver.

Bailey plays central character John, the only one with an actual name, who tells M (Egerton), his boyfriend of seven years,  that he has fallen for a woman, W (Jade Anouka).

John is a neurotic egotist, tortured by the thought he only exists in the gaze of others, but endlessly and repetitively ensuring that it remains so. He blames his own lack of self-identity on being instantly labelled gay when he came out. That immediately became all that he was, he moans. Nothing he does is his fault because he doesn’t know who he is.

M is repressed and controlling, while W is alternately strong, seductive and needy. It all builds to a soap opera farce of a dinner where John has promised both he will leave the other and to which M invites his nameless widowed father (Phil Daniels) as back-up.

The names (or lack thereof) signal archetypes verging on cyphers, matched by a sterile and stark curved metal backdrop and moving suspended fluorescent rods. The play opens and closes with a silent scream while the actors ‘dance’ and gyrate in transition to the next scene. Intimacy and intercourse are represented by stylised fully-clothed shrugs and thrusts, and graphic dialogue. It’s telling that the heterosexual ‘sex scene’ is one of the most engaging and effective. There is never any sense at all of why John and M should be together.

There is so much scope for a nuanced and wide-ranging examination of fluidity of sexuality and identity that simply never materialises. Every fickle and fleeting emotion and thought is talked and talked to death. Yet, it all has nothing  particularly new or perceptive to say.

Gender and sexual politics and understanding have come a very long way in the last decade but the script feels dated and redundant, even for 2009. It presents bisexuality as some strange new frontier. Meanwhile, whatever the year, nobody on stage shows any sense of self-awareness or self-responsibility.

Egerton can so easily ignite the screen but only shines in silent moments of anguish. Anouka tantalisingly blazes into occasional life and comes closest to convincing us she might be someone worth caring about. Bailey, at least, achieves palpable emotional truth in the somewhat powerful closing scene.

Across 100 minutes with no interval, all three leads give impressively committed, intense tour de force performances but, beyond the script limitations, this production lacks focus and internal truth, without which it is impossible to empathise. The intimate original 2009 Royal Court production with Ben Whishaw and Andrew Scott triumphed with far less bombast and gloss.

You’re ultimately left wishing the other two would simply walk away, or that John would simply choose himself. The downbeat ending is perhaps the most ‘realistic’ moment of the entire show but by then it was far too late to care.

COCK IS AT THE AMBASSADORS THEATRE TO JUNE 4