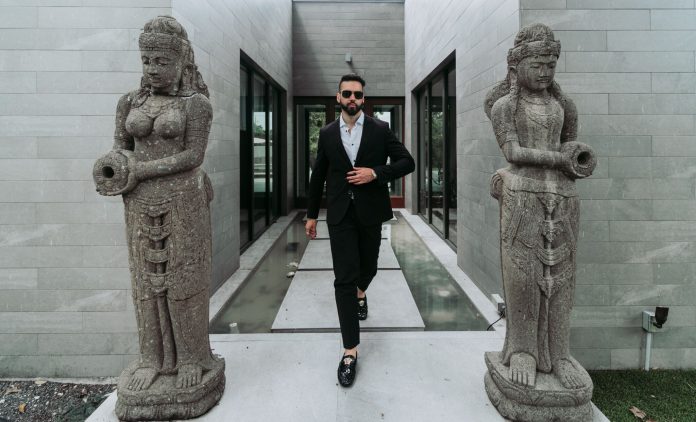 “You can be the next Jeff Bezos.”

Those are the exact words Grant Cardone said to Damian Prosalendis, creator of the world’s largest consulting firm for Amazon sellers. What happens towards the end of their meeting, as Grant initially chooses to tease young Damian that he only makes $100,000 a month. The video titled “Being A Millionaire Never Felt So Broke: Grant Cardone Meeting” opens up with Grant saying: “One hundred grand a month, dude, you’re broke, you don’t even have money”.

As an expert motivator and accomplished entrepreneur himself, Grant Cardone knows how to push one’s buttons and propel them to success. He knew young Damian needed a reality slap to make him think big again.

A reality slap like the one he received at the age of 18 when he picked up a mattress from the trash to sleep on and worked dead-end jobs for a measly $1-3 per hour to sustain himself. Now a Self Made Millionaire since 20 years old Prosalendis travels, lives in luxury estates around the world, drives supercars, and films the millionaire lifestyle. He is the producer of the New Age Millionaires Show, a web TV series about the lavish lifestyle of the young and successful.

On the side, he runs ProsaMedia, a new venture of his that helps turn everyday people into millionaires and businesses into multi-million dollar empires. Prosalendis has spoken on stage in front of over 5000 e-commerce brand owners with only 15 minutes’ notice. He was running three companies at 21 and a group of 9 at 24. Whilst juggling with all that, he’s also training multiple martial arts and aspires to become a world champion.

How Did All That Happen?

The interesting thing about Prosalendis’ success is that it came out of necessity. Had he not faced financial adversity in his teenage years, he may have not been driven to achieve anything.

When Prosalendis was 17, he took the Panhellenic exams, achieved high grades, and that gave him access to studying chemical engineering at Aristotle University of Thessaloniki. His idea was to take advantage of free university education in Greece in order to escape poverty. Things had gotten rough for his family while he was in high school, with an unemployed father and a mother barely earning $1000 a month, which was later cut off because she got cancer. If it weren’t for Prosalendis’s uncle, who was a dentist, they wouldn’t have been able to save her. The treatments were very expensive, and even his grandparents had to chime in from their pension. Because of all the financial adversity, his family went through, and the near loss of his beloved mother, he had a deep-seated urge to become financially free. However, the path of university education proved to be a bit too slow for him.

He moved out of his parents’ home and left his hometown for Thessaloniki, Greece, to live there on his own. As a broke student living off $200 a month his parents could afford to give him, it was extremely hard to get by. For a while, he slept on the hardwood floor of an unfurnished apartment he rented, before picking up a mattress from the trash one day to use as his bed. For food, he could only afford cheap cereal, milk and pasta. Thankfully, he was on university food stamps. That meant he had to wait in line for one or two hours every day to get free lunch. He would go to the university’s dining hall with Tupperware hidden in his backpack, hoping to be allowed a second run so that he could have dinner too.

In the span of the next one and a half years as a university student, he had to move in with his girlfriend because the apartment he rented had mold on the walls, plus he struggled to pay rent. Embarrassed by his situation and not wanting his girlfriend to pay for his living expenses, he later moved to a cockroach-infested dorm room. In the meanwhile, he had been doing odd jobs to get by, such as distributing flyers on the streets for a measly $1 per hour of work. He tried bartending gigs, worked as a waiter for a wonderful $3 per hour at a tavern, and even considered doing lifeguard training to work at some Greek island in the summers for extra cash. Yet it did not get better for Prosalendis, and he could not imagine living in the same condition for the remaining 3.5 years of his academic course.

Prosalendis decided to drop out of university, upon encountering information suggesting you could make a living on the internet. After failing with various money-making schemes for five months straight, without making a single dollar, he had his first success with freelancing on Fiverr.

Becoming a Millionaire and Exiting His Firm

What started as a part-time solution to his financial problems, soon became a full-time occupation and then turned into a million-dollar company. Initially, he would work only 3-4 hours a day and made $1500 in his first month doing that. But clients came in by the droves and work kept increasing. Within a few months, he was working a full-time 8-10 hours a day and making $5000 a month as a freelancer, specializing in sales copywriting for Amazon listings. Work kept increasing and he was heading towards burnout, unable to keep up with demand, despite raising his prices significantly. He couldn’t sustain the new 14 hour workdays, even though he was at that point making more money than doctors and lawyers with PhDs.

He set out to achieve financial freedom and escape poverty, but now he was in a different kind of rat race, having money but barely having any time. As a solopreneur he had way more duties and responsibilities than he would have as an employee, and he started getting annoyed by it. By sheer necessity, he started hiring and outsourcing. That took away a big burden from his shoulders. He was now able to work on the business, instead of working in the business, a fine distinction in the business world, signifying the transition from the day to day operations and fulfillment to the managerial duties of a chief executive officer.

A year and a half into this whole journey, when he was around 20 and a half, he was already a millionaire. He spent the next two years part-time traveling the world and part-time optimizing his business. This optimization got him to the point where he earned a net income of about $30-40,000 a month himself after all expenses. Unlike his early days of near burnout, that was done with only 1-2 hours of work a day after hiring people and automating. His only duty was management and strategy. The business then grew to become the world’s number one Amazon Consulting Firm with over 10,000 clients from 116 countries and four continents.

To mitigate the risk of having a singular source of income, he diversified in a classic millionaire fashion. It is said that the average millionaire has about 7 streams of income. That’s done so if one or a couple of them start going south, there are still many others left. Prosalendis had developed a lot of knowledge about selling on Amazon, as he was consulting million dollar e-commerce brands. Thus it was only natural that one of his next income sources was going to be e-commerce, in which he is still involved. To this day he’s been spreading his nest egg, not only by starting out a new business in different industries but also by investing in real estate in Dubai, USA and a few other countries.

Currently, Prosalendis is pursuing his dream of studying martial arts and fighting professionally. He had that dream from the age of 16 when he first started training, but with all the financial adversity he encountered he had to cut his training short from the age of 17 until 22. That’s when he slowly resumed training. Currently, at 24, he’s traveling all around training with the best fighters in the world. He used his money to buy his dream back, to be free to do what he truly loves instead of becoming a slave to his own success. He has exited his Amazon consulting firm because he had been neglecting it ever since he got back into martial arts. He knew that making a smart exit at the right moment would be more fruitful, than playing a losing game, as his focus shifted mostly onto fighting and lifestyle-related businesses such as his video production brand, Studio Badass.

Can The Rest Of His Business Empire Survive Without Him?

Now that he is traveling across the world learning martial arts, it doesn’t mean that his businesses stop running altogether. He had to give up something, but not everything. Prosalendis has managed to keep some of his businesses going by using a team and systems. He has a three-part theory of going from making zero to eight figures.

The first one is to help you move from zero to six figures. To do so, you need to have a highly developed skill — something high in demand and scarce, thus bringing in high income. The more in-demand your ability is, the more compensation. With that, it is inevitable to develop clientele since people are going to come asking for services related to that skill.

The second one is to move from six to seven-figure income. Once you are already getting six figures, build a team of experts around you. The team will come in handy in servicing a progressively increasing number of clients.

Lastly, to move from a seven-figure to an eight-figure income, you need to set up systems. That is to make it possible to detach yourself and your time from giving service to the clients.

This Podcaster Aims To Help You Chase Your Vision