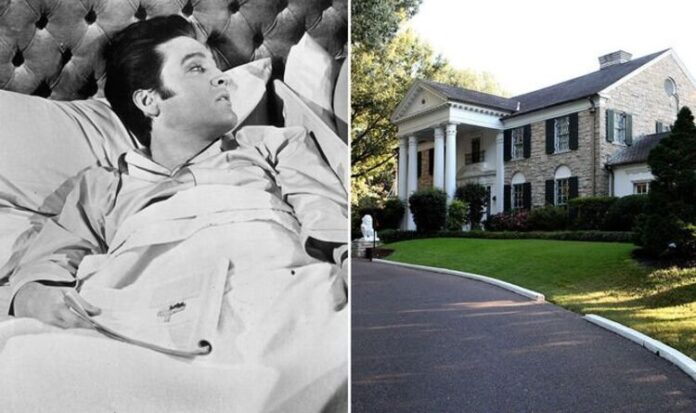 Being such a gigantic megastar, Elvis Presley had to go out of his way to protect his privacy. Graceland may have been his home, but there were some areas that were even off-limits to the Memphis Mafia unless personally invited in by The King. When he moved into the mansion in 1957, the singer had a security wall installed on the first-floor landing with one-way mirrors and security cameras.

Behind the double doors leading to his bedroom was a massive oversized bed which he shared with his wife Priscilla and then later long-term girlfriends Linda Thompson and Ginger Alden.

One of his favourite couples to invite up there were Billy and Jo Smith. Billy was Elvis’ cousin and worked for him in the Memphis Mafia.

They’ve shared in the past how The King loved to keep his bedroom really cold and would offer guests racquetball court jackets to stay warm.

Up there in the private space, they’d watch movies on one of a couple of TVs in the room or sit right in the middle of the bed where they’d hold hands and share spiritual insights.

In another video, Jo recalled of times in Elvis’ bedroom: “He pretty much dominated what we were doing since it was his room. He was the boss! It always was interesting. He’d talk about different things it could be anything. Something scientific, aliens…I remember one time everybody had to cover their eyes and then had to describe what we were seeing at that moment, what was going on in our mind, and then he analysed it.”

She also shared memories of a protection chant they’d say together led by The King, which would be: “Christ love, Christ life, Christ peace.”