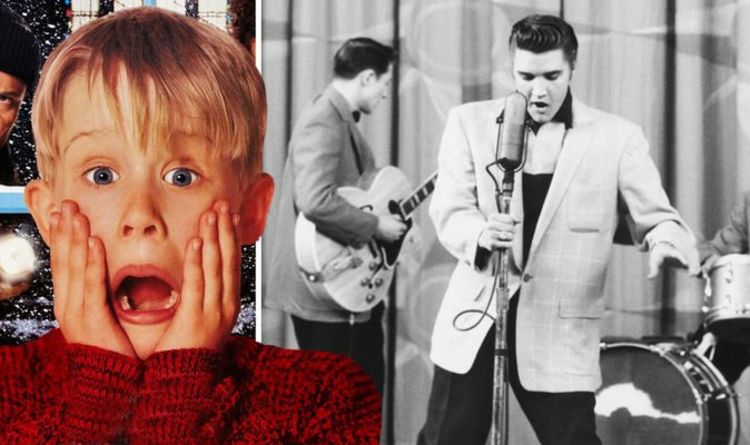 Elvis Presley died on August 16, 1977. The King of Rock n Roll died of a cardiac arrest at his home, Graceland, in Memphis, Tennessee, USA. The singer was in the mansion with his new fiancée, Ginger Alden, and his doting daughter Lisa Marie Presley. The 42-year-old’s death shocked the world. Thousands attended his funeral, and millions have since visited his grave at Graceland to pay their respects to the greatest performer of the 20th century.

However, shortly after the King’s death, rumours hit newspapers that he was not really dead.

These theories continued to grow when sightings were reported of the Jailhouse Rock singer at an airport, boarding a flight to Buenos Aires.

Over the years a number of theories surrounding what the King had been doing since his death have continued to thrive in newspapers, and online.

One of the most bizarre stories is the theory that Elvis can be seen in the 1990 film Home Alone, behind Catherine O’Hara’s character Kate during a scene at an airport.

Julio continued: “I have to tell you, I’m a cinematographer, and I’ve shot a lot of stuff.

“I once shot some infrared film for a movie called Blind Dating, with Chris Pine. So I was filming infrared film in this park, and this figure of a boy that was dressed in 1800s clothing photographed in the shot.

“And I can assure you with 100 per cent accuracy that there was nobody there, because when I did the shot, I wanted the serenity of nothing in the shot, I just wanted it to be a plain thing, nobody was there.

“If I shot that shot with infrared film, he is probably there.’

It was also recently suggested that Elvis was “spotted” as recently as 2017 at his own birthday celebration in Graceland.

One Direction: How did Harry Styles meet Shania Twain? Are they...