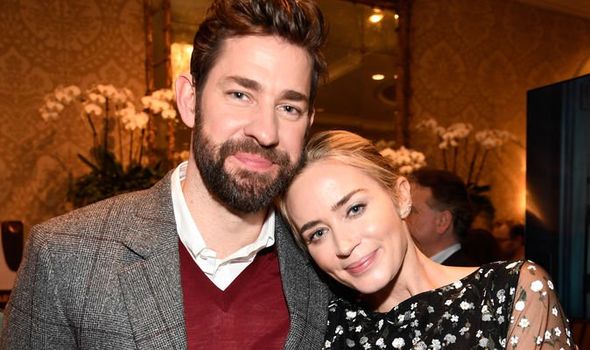 Swerving through crowded streets, the huge coach passes just one spine-chilling inch from her vehicle, as motorists crash all around her. It’s the opening scene for her latest sci-fi horror thriller film, A Quiet Place Part II, which opened in the UK this week. But it was all filmed in real life without computer generated images, and the deathly threat from the bus was all too real. Yet she had absolutely no control over the outcome, because her survival depended on the skills of the stunt driver secreted on the roof of her car before filming began.

“I’ve never been so filled with adrenaline in my life,” says Blunt, 38, who told the stuntman: “My life is in your hands. I hope you’re really good.”

“He just shook my hand and said: ‘I’m the best’. It’s the most real stunt I’ve ever done in my life. I was shaking after it.”

The director who put her life on the line was none other than her husband, actor John Krasinski, who won acclaim for writng and directing the 2018 original A Quiet Place, an unexpected hit that “was like lightning in a bottle, astonishing to everybody involved”.

Yet neither Blunt nor her American husband wanted to make a sequel to a film whose surprise had been revealed: an alien invasion by creatures hunting people by sound. Survival depended on maintaining a near-impossible silence.

“I don’t believe that everything should be sequel-sized,” she says. Krasinski, aged 41, agrees: “I didn’t want to do a second one. I didn’t want it to be some big regurgitated thing.” The film’s makers, Paramount Pictures, had other ideas though. The studio decided to forge ahead on a sequel without the couple.

“They brought in 20 writers to attempt to come up with the second one, and none of the ideas really worked,” says Blunt. “And then John just went, ‘I mean, if I was going to do another one, you know, this is sort of what I would do…’

John and Emily were originally not keen on doing a sequel (Image: Getty)

“And he just started to pitch an idea. And I just remember being gripped by it, and thinking: ‘Oh, s***, we’re gonna have to do it.’ The idea he came up with was too good.”

Paramount agreed. The sequel was filmed and it was all ready to open in March 2020 when coronavirus closed down cinemas with just days to go, putting the movie on ice – until now. Blunt retreated to the couple’s home in Brooklyn, New York, reading scripts and books, and homeschooling their daughters Hazel, aged seven, and Violet, five.

“Being around little ones during the pandemic was such a saving grace because they would just be bouncing around the house, and your job is to protect them from what is happening,” she says. “That was a pretty great lifeline for John and me.”

With pandemic restrictions easing she’s now in Spain filming Western series The English – “if I can remember how to act after a year and a half not doing it”.

The past year’s enforced isolation and self-reliance finds echoes in A Quiet Place Part II. “That idea of tiptoeing out there into the big bad world is probably resonating with people more so now,” she says.

Married couples are often warned away from making movies together, as the stress can tear them apart, but Krasinski can’t praise his wife enough.

“She’s the best collaborator I’ve ever had,” he says. “And it’s not just her performance, her preparation, how professional she is. She is unbelievably warm, providing energy for every single person on set.

“She makes everyone feel comfortable and focused on the goal of making this movie great.”

Blunt will be seen in another blockbuster film opening next month.

She co-stars with Dwayne “The Rock” Johnson in Disney’s adventure Jungle Cruise, inspired by a Disneyland theme park ride, hoping to strike the same gold that saw theme park ride Pirates Of The Caribbean become a £3.2billion movie franchise.

She plays an Indiana Jones-style daredevil paired with Johnson’s duplicitous sea captain. “She’s the go-getter. He’s the one who is stuck and she’s not, and I really liked and respected that,” says Blunt, whose film roles range from playing a harried fashionista in The Devil Wears Prada to a military hero in the sci-fi action thriller Edge Of Tomorrow opposite Tom Cruise.

Her two new films are “wildly different from each other,” she says, and also contradict conventional wisdom that an actor should avoid releasing two major films simultaneously. “I think Covid has taught everyone to be very innovative and not to sweat the small stuff so much.”

Blunt has come a long way from her London childhood, when she struggled to overcome a stutter, which made her a keen observer of people.

Enticed to perform in a school play, she was astonished to discover that she could control her stutter on stage.

“I agreed to it, and I did speak completely fluently,” she said last year while speaking about conquering her speech impediment. “That was the beginning of realising that I had a handle on it, and maybe it could be temporary, and maybe I could grow past this.”

The daughter of a London barrister and a former actress, whose grandfather was a major general and uncle is Tory MP Crispin Blunt, she planned to study languages at university and become an interpreter.

But while studying for her A levels Blunt was cast in a school play that went to the Edinburgh Festival, where she was spotted by a theatrical agent… and it changed her life. “I didn’t have a desire to pursue acting and I wouldn’t have, if I hadn’t fallen into it,” she has said.

Her West End stage debut won her a Best Newcomer award, and she never looked back.

“It was very charmed,” she says of her success, “rather embarrassingly, in fact.”

In A Quiet Place – spoiler alert – her on-screen husband – Krasinski – died at the end, so for the sequel her leading man is Irish star Cillian Murphy playing an enigmatic stranger.

Blunt and her husband were struggling to find the right actor for the role when they sat back one night watching TV series Peaky Blinders. Seeing Murphy, both cried: “That’s him!”

It became a mutual admiration society.

“Emily is one of the finest actors working today,” says Murphy, aged 45.

“There’s nothing she can’t do… She’s just a really good person and really great company – and same with John.”

It was Blunt’s trust in her husband that persuaded her to film the scene’s runaway bus opening.

“No one wanted him to do this shot,” she admits. “Everyone said it cannot be done.” They rehearsed the scene for two weeks in a car park before attempting it on the open road. There is no CGI, there is only one shot, and there is a real bus,” she says. “And it was the first take we used.”

A Quiet Place Part II also explores how isolated individuals can be reluctant to reach out to help others, again echoing today’s pandemic society.

“I get sort of overwhelmed if I think about it,” admits Blunt. “I’ve always been such an eternal optimist, so it’s hard for me to feel completely doomed, ever.

“But we are in a precarious time. There’s some kind of purging happening.

“We just have to keep helping each other, and be hopeful.”