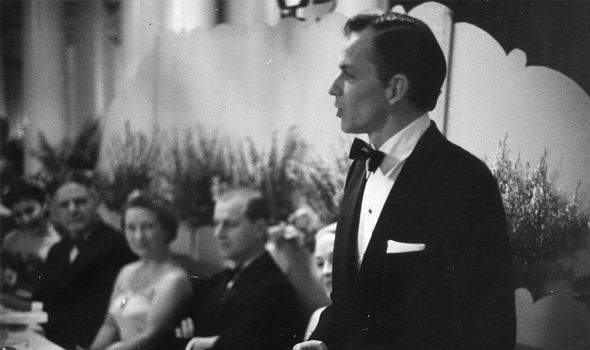 Some performers crop up again and again. Musicians who left their mark on history get revisited through film, TV and literature. But not Frank Sinatra.

Despite the singer having influenced a global generation and being considered one of the greatest artists of the 20th century, little comes around of old Ol’ Blue Eyes.

That changed last night, when ‘Sinatra: King of the Crooners’ aired on Channel 5.

The documentary chronicles the life of the legendary singer and actor, from his difficult birth and near-death in Hoboken in 1915, through his rise to become one of the world’s biggest entertainers.

Using music and testimony from many of Frank’s closest friends, his career highs and lows will be charted, as well as his numerous affairs with some of the world’s most successful and beautiful women.

Frank Sinatra: He and Prince Philip collaborated to release a charity single in 1951 (Image: GETTY)

History: He is largely considered as one of the greatest musicians of the 20th century (Image: GETTY)

The documentary also explores the darker side of Frank’s life, investigating his links with organised crime, aiming to answer once and for all whether his success was due to the Mob.

Frank had another, less-known collaboration, with none other than Prince Philip.

In 1948, Philip became president of Fields in Trust, a charity set up to provide children with green spaces.

During his 64-year tenure, he was heavily involved in the organisation, particularly with its fundraising activities, eventually stepping down in 2013.

JUST IN: Queen told Obama to leave State Banquet as she was tired

Charity: Philip worked with charities throughout his life (Image: GETTY)

Keen to network with the world of celebrity, Philip reached out to Frank about the possibility of recording a record to raise funds.

Helen Griffiths, chief executive of Fields in Trust, told Virgin Money Giving that what materialised was something that is widely regarded as the world’s first “charity single”.

Philip and Frank would actually go on to share a friendship.

Friends: The pair went on to become friends (Image: GETTY)

The single, released by Frank in 1951, was called ‘If Only She’d Looked My Way’.

It is complete with a spoken-word introduced by the Duke himself.

All proceeds from its sale went to Fields in Trust.

It was not the only time Frank would help charity.

According to his website, he worked with numerous other organisations throughout this career.

These included the Alzheimer’s Association, the Barbara Davis Centre for Childhood Diabetes, the Barbara Sinatra Centre for Abused Children, the Los Angeles Police Memorial Foundation, Save the Children and Starkey Hearing Foundation.

He was also awarded the Hollzer Memorial Award by the Los Angeles Jewish Community in 1949.

On November 1, 1972, he raised $6.5million (£4.9million) in bond pledges for Israel, the equivalent of around £66million in today’s money, and was given the Medallion of Valour for his efforts.

Then, in 1978, the Frank Sinatra Student Centre at the Hebrew University of Jerusalem was dedicated in his name.

Later, in 1985, President Ronald Reagan presented Frank with the Presidential Medal of Freedom, and remarked: “His love of country, his generosity for those less fortunate … make him one of our most remarkable and distinguished Americans.”

And just a few years after, he and his wife Barbara founded the Starkey Hearing Foundation Celebrity Invitational in 1988 to raise funds for Barbara Sinatra Centre for Abused Children at Eisenhower Medical Centre in Rancho Mirage, California.