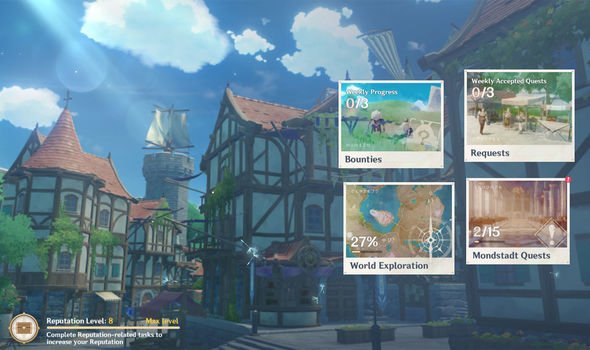 While Blazing Rift Xinyan and Diona Katzlein Cocktail are new four star characters that have been added to Genshin Impact.

The Genshin Impact ‘A New Star approaches’ patch will also add the first seasonal event for the game which is called Unreconciled Stars.

And the first major patch for Genshin Impact also includes a new City Reputation System, which is tied into quests you obtain from NPCs.

While in a post online MiHoYo gave fans a rundown of what to expect from Genshin Impact update 1.1 in a patch notes-style notice.

Introducing it the Genshin Impact and Honkai Impact 3rd makers said: “The mysterious emissary Ganyu appears before you at Third-Round Knockout. Claiming to have come at Ningguang’s behest, she invites you to the skyfaring palace known as the Jade Chamber.

“To that end, you and Paimon have come to Mt. Tianheng, from where you can see the Jade Chamber in the distance…

“Why has the Jade Chamber emissary come? What is the truth behind the death of Rex Lapis? Whose ambitions lie behind this chaos? And when the dust settles, where will your journey take you next…?”

1. Update Maintenance Compensation: Primogems ×300 (60 Primogems for each hour servers are down)

Includes fixes to the following issues: (1) Some characters and artifacts had descriptions that did not accurately reflect their effects. (2) Some character skill and talent effects did not function normally in certain situations.

• No. 11 of The Harbingers, also known as “Childe.” His name is highly feared on the battlefield.

His Elemental Skill, Foul Legacy: Raging Tide, unleashes a set of weaponry made of pure water that deals Hydro DMG to surrounding enemies. His Elemental Burst, Havoc: Obliteration, unleashes either “Flash of Havoc” or “Light of Obliteration” based on the Stance he is currently in.

• A young lady who has inherited trace amounts of non-human blood. She is the incredibly popular bartender of the Cat’s Tail tavern.

Her Elemental Skill, Icy Paws, deals Cryo DMG and creates a shield on hit. Her Elemental Burst, Signature Mix, tosses out a special cold brew that creates a Drunken Mist, dealing Cryo DMG to enemies and continuously regenerating the HP of characters within the AoE.

During the event wish “Farewell of Snezhnaya”, from after the Version 1.1 update to 2020/12/01 15:59:59 (Server time), the event-exclusive 5-star character “Childe” Tartaglia (Hydro) and the 4-star characters “Kätzlein Cocktail” Diona (Cryo), “Uncrowned Lord of Ocean” Beidou (Electro), and “Eclipsing Star” Ningguang (Geo) will have their Wish drop-rates greatly increased!

The Test Run character trial event will be available from after the Version 1.1 update to 2020/12/01 15:59:59 (Server time). Travelers can use fixed team compositions that contain the trial characters to complete designated challenges. Once the challenge is complete, you can obtain the corresponding rewards!

• A mysterious guest invited by the Wangsheng Funeral Parlor. Extremely knowledgeable in all things.

His Elemental Skill, Dominus Lapidis, commands the omnipresent power of earth to solidify into a Stone Stele, dealing AoE Geo DMG. His Elemental Burst, Planet Befall, brings a giant meteor crashing down, dealing massive Geo DMG to enemies within the impact radius and petrifying them.

• A stone dumbbell containing distant memories. Its endless transformations reveal the power within.

Increases the Shield Strength of the one equipping it. It increases ATK on hits, and this effect is strengthened while the character equipping it is under the protection of a shield.

The event wish “Epitome Invocation” will be available from after the Version 1.1 update to 2020/12/01 15:59:59 (Server time). In this event wish, the event-exclusive 5-star weapon Memory of Dust (Catalyst) and the 5-star weapon Skyward Harp (Bow) will get a huge drop-rate boost!

The mysterious emissary Ganyu appears before you at Third-Round Knockout. Claiming to have come at Ningguang’s behest, she invites you to the skyfaring palace known as the Jade Chamber. To that end, you and Paimon have come to Mt. Tianheng, from where you can see the Jade Chamber in the distance…

The Eleventh of the Fatui Harbingers, Childe, seems to have been lying low for quite a while since whipping up a storm at the Rite of Parting. But a chance encounter with someone from the other side of the ocean is about to reunite the two of you in Liyue once again.

Complete these quests and obtain Mora, Character EXP Materials, and other rewards!

•  Event Rules: During the event, complete designated quests and “Star of Destiny” challenges to obtain Fading Star’s Might and Fading Star’s Essence!

Besides this, The Gliding Challenge and While It’s Warm events will become available at a later date. Stay tuned for more information.

• Travelers can speak to Knights of Favonius Coordinator, Hertha and Ministry of Civil Affairs Secretary, Ms. Yu to take on new Bounties and Requests. You can also collect Reputation EXP rewards from them for World Exploration, Mondstadt Quests, and Liyue Quests.

• As you increase your Reputation Level, you will unlock special city features, recipes, gadget blueprints, namecards, wind gliders, and other rewards.