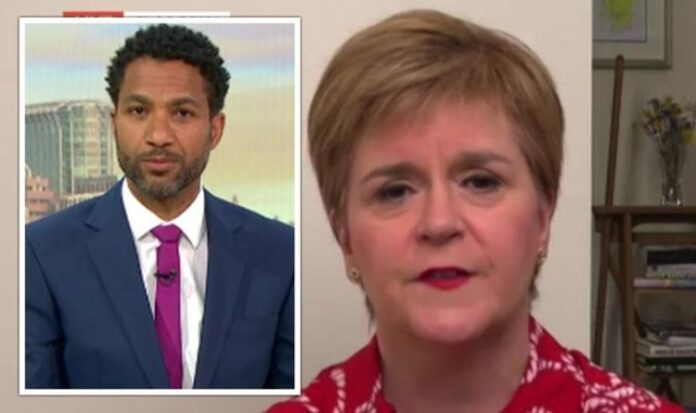 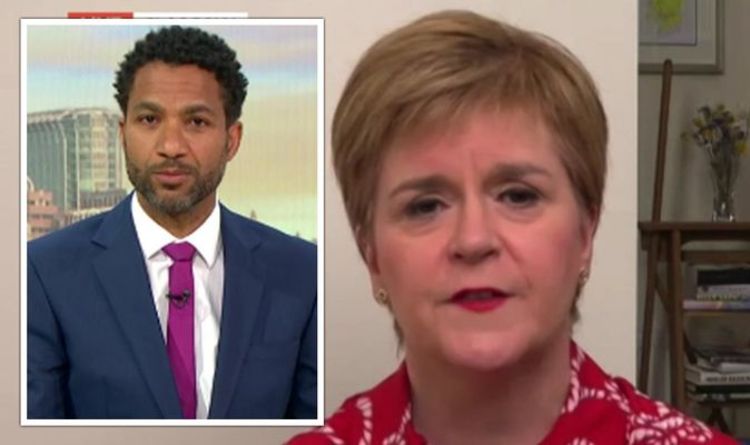 As the Scottish elections draw closer, Sean Fletcher quizzed the First Minister of Scotland about her plans for a second independence referendum. Nicola Sturgeon outlined her hopes the country could rejoin the EU but the Good Morning Britain host was keen to point out there were downfalls of rejoining Brussels.

As Sturgeon detailed the benefits of Scotland joining the EU and the single-market, Fletcher pointed out it wouldn’t have helped with vaccination against COVID-19.

“Independence is actually about expanding our horizons and not narrowing them,” Sturgeon argued.

Fletcher hit back: “It’s worth pointing out that if an independent Scotland was in Europe you wouldn’t have 2.8million people vaccinated would you?”

READ MORE: Our Yorkshire Farm: Amanda Owen shut down by son over request

Sturgeon argued: “The UK was still in the transition period when it procured the vaccine and that didn’t prevent it procuring the vaccine on a four nations basis with England, Wales, Northern Ireland and Scotland.

“The way we procure the flu vaccine every year, that was done. Nothing would have prevented that happening had we still been in the European Union.

“Of course the delivery of the vaccination programme in Scotland is down to the sterling efforts and fantastic work of the NHS Scotland vaccinators and teams across the country.

“They have my deep and everlasting appreciation for the fantastic work they’re doing.”

“It’s important we learn lessons, we’ve already had experts here in Scotland do an initial study and before I say this, one death is one too many and we have a lot to learn.

“But they have found that while they can’t rule out any impact there is no statistically significant associations between hospital discharges and care home outbreaks.

“They say the much bigger driver of care home outbreaks was the size of the care home.“

Sturgeon continued: “Now we need to do a lot more. That’s why I think I’ the only leader in the UK four nations to give an unequivocal commitment to a public enquiry into the handling of this, including the handling of what happened in care homes and to get that enquiry under way, I hope before the end of this year.”

When Garraway pressed Sturgeon about the care home crisis, she explained: “We’re still learning about this virus every single day and we try to adapt our response depending on that learning.

“Everybody in a leadership position should be reflective of things they might have done differently.

“One death is too many and we’ve got lots of lessons to learn… I think I’m still the only leader in all of the four UK nations to give an unequivocal commitment to a public enquiry of our handle of this, I hope before the end of this year.”

‘If Scotland was in Europe you wouldn’t have 2.8million vaccinated' Sturgeon shamed on GMB