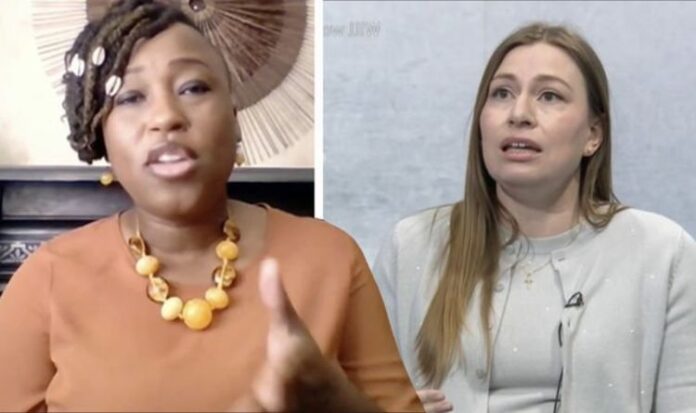 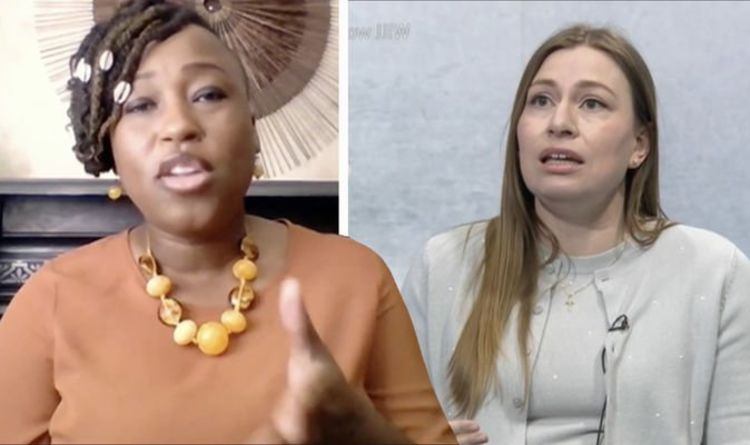 Nicky Campbell was hosting today’s The Big Questions on BBC One and he was joined by a variety of guests in the Manchester studio, and on live video link. A row ensued between Alena Kate Pettitt and Dr Shola Mos-Shogbamimu about patriarchy in Britain and how some women are being suppressed by males in the workplace and at home.

Nicky kicked off the show by introducing the topics, he said: “Today on The Big Questions, will women every achieve equality and morally, is Shamima Begum Britain’s responsibility?”

With International Women’s Day celebrating the achievements of women across the globe tomorrow, there is “still a long way to go before women achieve equality”.

Everyone was asked what could be done to make progress and changes to reach “true equality for women” and one of the guests spoke about equality of opportunity vs equality of outcome.

Emma Webb, a Research Fellow “disagreed” with Nicky “quite strongly”.

“Equality of opportunity, we do tend to focus on equality of outcome as a measure of whether or not there is systemic discrimination, it’s seen as pointing to something being wrong within organisations or society more broadly. And I don’t think that’s the right way to look at it,” she added.

Toxic masculinity was then mentioned as well as the patriarchy and Author Alena Kate Pettitt was keen to give her view.

“I struggle with this, I honestly don’t feel like I’ve been held back by men whatsoever,” she remarked. “Legislation wise, perhaps, the lawmakers and there should be more women lawmakers of course.

“I have worked in very female-dominated environments and it was like crabs pulling each other down. And I’ve also worked in a male-only environment where I was the woman, you’d expect me to be the one t make the tea, whereas actually I was far more respected there,” Alena added.

Dr Shola Mos-Shogbamimu jumped in: “Can I comment here? Can I just say this is part of the problem, I find a lot of us today, in fact, every single woman, the success we have the opportunities we have is because of other women who went before us and fought the good fight.

“So when we get to the stage that we’re at and I hear comments like ‘I don’t see structural patriarchy’ that actually concerns me.

“The fact that you may not experience certain things, you should be able to see that there are other women who are experiencing systemic patriarchy.

“And the other point about equity and equality, the outcome can be an indicator of equality. And we don’t need to treat them as separate things, they intersect, they coexist, they want the same,” she continued.

“And choices, the choices women make should be available to them, whether they are in their 30s, 40s, decides to have children and raise her kids, should not be a determining factor on what equality of equal outcome means.”

Nicky said: “Alena, do you want to come back in on that?

“And of course, there are huge complications and intricacies along the way because this is not just women and men, we’re talking about cultural differences, social differences, educational differences, religious differences. Goodness only knows what in those categories!”

“I do not believe that there is this overarching patriarchy that’s keeping us down.

“I never felt like I couldn’t achieve anything in my life, yet the choices I’ve made, feminism means choice but my choice is criticised by other women because they believe I’m oppressed and under the patriarchy – which is frankly, insulting.”