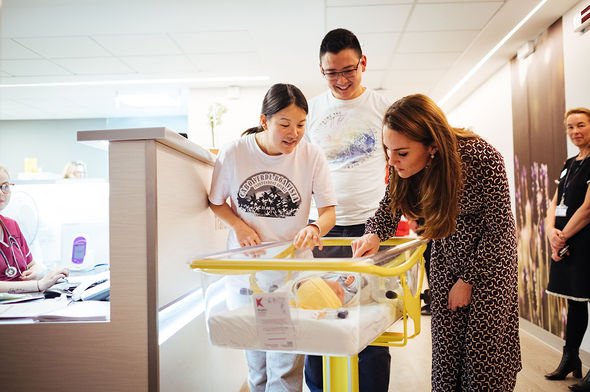 In December 2019, the Duchess of Cambridge wrote an open letter to Britain’s midwives. She praised their life-changing work, the warmth and humanity with which they pursue their vocations, and their selflessness. “You don’t ask for praise or recognition but instead unwaveringly continue your amazing work,” she wrote.

As her 40th birthday on Sunday draws near, it’s possible to reach a similar conclusion about the Duchess’s approach to her own work, the public engagements in which, like her grandmother-in-law the Queen, she seeks neither praise nor recognition, but goes about the tasks she has set herself with commitment, sincerity and warmth.

More than a decade after her marriage to Prince William in 2011, the former Kate Middleton has won widespread respect and affection: increasingly commentators acclaim her as both her husband’s and the Royal Family’s secret weapon.

A mother-of-three, she juggles public engagements with parenting that is as hands-on as she can make it.

To the events she attends she brings thoughtfulness, politeness and ‑ as we saw at the autumn premiere of the Bond film No Time To Die ‑ lashings of glamour.

Catherine has taken her time to shape her public role. The highest-ranking royal woman of her generation, she was previously criticised in some quarters for a workload considered too light, but has emerged over the course of the pandemic as a key royal player, steadfast in her support of her chosen causes as well as those of her husband, Prince William.

Kate at the No Time To Die premiere (Image: Max Mumby/Indigo/Getty)

Last year, when the work of the Royal Family was necessarily restricted, the Duchess still managed 119 engagements, a figure likely to increase significantly over coming years.

Most of all, the Duchess has given stalwart support to her husband. Perhaps mindful of the competitiveness that proved so toxic in the marriage of his parents, William and Catherine have consistently worked as a duo.

Duke and Duchess, husband and wife, mother and father: their close and loving partnership shapes every aspect of their lives.

Whenever possible, they share their children’s school runs. In the same way, their chief charitable focus, The Royal Foundation, is a joint undertaking.

Clearly, the Cambridges are happiest sharing the limelight. Both in public and in private, Catherine’s support for William is unwavering.

Last year, they marked their 10th wedding anniversary with a 40-second video clip. It showed the couple and their children ‑ George, Charlotte and Louis ‑ on a blustery walk close to Anmer Hall, their Norfolk home.

It recalled the kind of footage released nearly a century ago by William’s great-grandparents, George VI and Queen Elizabeth (afterwards the Queen Mother). George VI described his family ‑ himself, Queen Elizabeth and the two princesses, Elizabeth (our Queen) and Margaret ‑ as “us four”. To outsiders and friends alike, the Cambridges are “us five”.

In the early days of their marriage, William sometimes seemed a little reluctant to fully embrace his royal destiny, almost retreating from high-profile royal duties into his more private role as a part-time search and rescue helicopter pilot.

Catherine has played a key part in his transition to frontline royal player.

And the charities she supports are vocal in their appreciation. Chief executive of the Anna Freud Centre for Children and Families, Prof Peter Fonagy, has worked alongside the Duchess since 2015.

He recently described her as: “Someone with genuine concern, and wanting to make use in the best way she can, the most serious and committed way she can, of her current position, to improve lives”.

The Duchess’s friends claim that, like the Queen, who, in her Platinum Jubilee year, remains patron of more than 400 charities with which she has been involved since 1952, the Duchess makes a long-term commitment to her chosen causes.

This is one reason she picks her patronages so carefully. The initiatives she supports, including early years education and care, mental health and wellbeing, addiction, visual arts and sport, are close to her heart.

Once she decides to engage, she does thorough research and takes the commitment seriously.

The Queen has high regard for Kate (Image: Geoff Pugh/AFP via Getty)

The Duchess’s efforts have not gone unnoticed by the Queen. In 2019, on the eighth anniversary of Catherine and William’s wedding, Her Majesty made clear the esteem in which she holds the future Queen Catherine.

She rewarded the Duchess with one of her highest awards, appointing her Dame Grand Cross of the Royal Victorian Order.

For William’s wife, it was a very public pat on the back from the sovereign. It is not an honour the Queen bestows on every royal wife.

There have been other signs of the Queen’s high regard. Royal women traditionally borrow jewellery from the monarch’s splendid collection.

As I discovered while researching my recent biography of the Queen, many of the pieces loaned to the Duchess of Cambridge have strong associations with the Queen’s closest family members, including her beloved grandmother Queen Mary, who, in 1913, commissioned from royal jewellers Garrard & Co the Lover’s Knot Tiara that has become Catherine’s favourite.

She has also worn the Lotus Flower Tiara, previously worn by the Queen’s mother and her sister, Princess Margaret.

Most touchingly of all, Catherine has been allowed to borrow the large platinum-set diamond bracelet that Prince Philip gave his bride as a wedding present in 1947, a piece of considerable sentimental value to the Queen.

It is clear that her success is due to more than her dazzling looks.

On the cusp of 40, the Duchess of Cambridge resembles a queen-in-waiting: sensible, stalwart and stylish. Her middle-class childhood in rural Berkshire was notably happy, a source of the stability that is a key part of her character. By the time she married Prince William, she had known the heir to the throne for a decade.

In 2009, the Queen appointed a former ambassador, Sir David Manning, to a part-time, unpaid role as “wise man” to Princes William and Harry.

Sir David witnessed Catherine’s transition from Kate Middleton to Duchess of Cambridge. Before her engagement, Sir David has said, Catherine, “had thought deeply about what she was taking on and the sort of life it entailed”.

Unlike other recruits to the Royal Family, Catherine has never jibbed at the restrictions of her new life, or the unrelenting scrutiny of the media and public attention.

For Sir David, as for other commentators, the Duchess of Cambridge is now central to the future success of the monarchy in Britain, a wife and mother of kings-in-waiting. Has it gone to her head? Not a bit of it. Her modesty, despite her successes, is like the Queen’s. For both women, public service and a happy family life are more important than public adulation.

A former private secretary, Jamie Lowther-Pinkerton, has pointed to the Duchess’s politeness to everyone she meets. She gives the clear impression of enjoying many of her engagements, with her ready smile and quick laughter.

Undoubtedly, her journey has taken her on a steep learning curve, but she has used the opportunities available to her carefully. In May 2018, for example, she brought together a steering group of experts to focus on how to bring about positive, lasting change in children’s early years experience, especially disadvantaged children.

As she told an audience in 2019: “I am passionate about improving children’s life chances and giving them opportunities.”

At 40, friends have suggested, Catherine has blossomed into the difficult role of prominent royal wife, happy in her marriage, happy as mother to the couple’s three children, happy in her public life as Duchess of Cambridge.

Her efforts have won her considerable popularity. In a YouGov survey last year, she ranked as fourth most popular member of the Royal Family. Ahead of her were the Queen, the now late Prince Philip ‑ and the Duchess’s husband, Prince William.

With Kate at his side, no matter how many challenges the Royal Family has to navigate, the prospects of our future King look bright.

Matthew Dennison’s biography of Elizabeth II, The Queen (Apollo, £12.99) was published in paperback this week. For free UK P&P on orders over £20, call Express Bookshop on 020 3176 3832 or visit expressbookshop.com