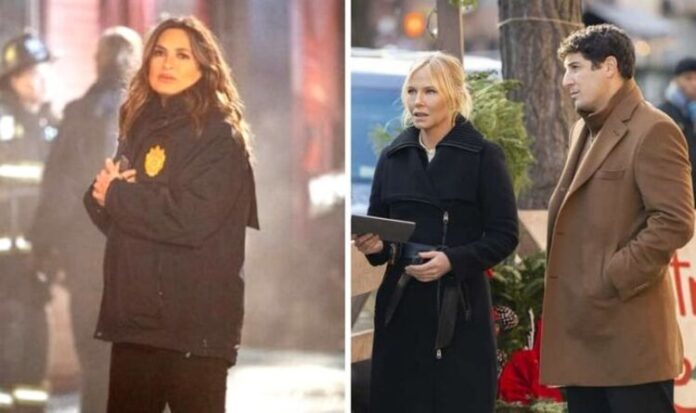 NBC’s long-running crime series Law and Order SVU has shown no signs of slowing down as it continues to air its 23rd season. After a fan-favourite made an appearance as a special guest, viewers want even more episodes from the show with Jason Biggs promoted to become a permanent cast member.

Throughout the 23 years, Law and Order SVU has been on screens, they have had a plethora of show-stopping guest stars.

This includes some of the biggest names in Hollywood starring on the show including Bradley Cooper, Angela Lansbury, Norman Reedus and Whoopi Goldberg.

However, none in the recent years have sparked as much fan frenzy as Jason Biggs after his recent appearance.

After he first starred in the episode titled ‘Silent Night, Hateful Night,’ as Detective Andy Parlato-Goldstein, he has become a recurring character after another appearance in the most recent 15th episode.

After Biggs returned to Law and Order SVU after what fans thought was a one-time occurrence, viewers have called for the actor to become a permanent cast member.

The show’s official Instagram page posted a video and series of behind-the-scenes photos of Biggs.

It was captioned: ”Hey hey! [Jason Biggs] here and this one time, I got cast on #LawAndOrder #SVU so now I’m going to take you all around. P.S. swipe to see who won best guest star of all time.”

This caused a frenzy in the comment section from fans who begged the show for Biggs to have more screen time.

@gt_lue500 posted a number of laughing emojis and added: “this is the perfect quote. He deserves to be a regular!”

His character Andy worked in the Hate Crimes Division under Captain Declan Murphy (Donal Logue) and his team would often work with the Special Victims Unit (SVU).

During his first appearance, the two teams worked together to stop a series of hate crimes which took place on Christmas Eve.

After impressing SVU captain Olivia Benson (Mariska Hargitay) with his skills and deduction Detective Parlato-Goldstein then returned for another investigation.

Biggs made another appearance on the series for the recent episode titled ‘Promising Young Gentleman.’

Although Benson investigated a college’s secret society that preys on female students, she was able to gain assistance from the Hate Crime Division.

This came after prosecutors agreed for the assault case to be turned into a hate crime after receiving additional evidence.

Law and Order: SVU is available on NBC in the USA. A UK release date is yet to be announced.

Law and Order fans beg NBC for guest star to be made permanent: ‘Keep him on!’