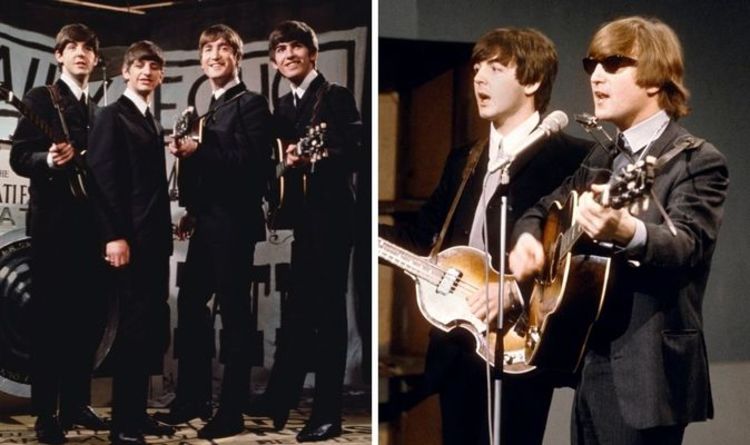 Lennon-McCartney, made up of John Lennon and Sir Paul McCartney, were the chief songwriters for The Beatles. As the years went on, their colleagues Sir Ringo Starr and George Harrison also contributed compositions to the band’s repertoire. But it was John and Sir Paul whose songs have gone down in history – but how many songs did they write?

Between October 5, 1962, when The Beatles began proper, and May 8, 1970, when the band split, the Lennon-McCartney partnership had published approximately 180 songs.

Most of these songs, unsurprisingly, were recorded by The Beatles, and to this day make history.

The songwriters were hugely successful and well-liked in their time, with The Times critics naming them as The Outstanding Composers of 1963 in their Christmas edition.

John has spoken of the pressure of the partnership, with him spending days trying desperately to write songs to bring to the band.

In his 1980 Playboy magazine interview, he said of their working relationship: “[Paul] provided a lightness, an optimism, while I would always go for the sadness, the discords, the bluesy notes.

“There was a period when I thought I didn’t write melodies, that Paul wrote those and I just wrote straight, shouting rock ‘n’ roll.

“But, of course, when I think of some of my own songs – In My Life, or some of the early stuff, This Boy – I was writing melody with the best of them.”

It took some time for John to get to this place, expressing in the same interview how difficult it was to write sometimes.

“There was a problem with that period. I was living a more suburban life at the time, with a wife and kid, while [Sir Paul] was still tripping around town.

“He [Sir Paul] would work something out for a song or an album and then suddenly call me and say, ‘It’s time to go into the studio, Write some songs.’

“He’d have his prepared while I would be starting from scratch.”

While this may have caused a tense working atmosphere, according to John, it spurred him on to write some big hits, including writing two mega-hits in just a week-and-a-half.

He added: “I managed to come up with Lucy in the Sky and A Day in the Life under the pressure of only 10 days.”

After John’s death, there were reports of Sir Paul attempting to reverse the songwriting credits for a number of The Beatles songs from Lennon-McCartney, to McCartney-Lennon, which he has spoken about several times as a long-standing dispute between them.

Sir Paul recently told The Adam Buxton Podcast: “I went to the meeting and Brian and John were there – John had got there a little earlier and they were chatting – and it came up.

“‘Ok, next thing is we’re going to credit things Lennon-McCartney.’

“And I said, ‘Well what about McCartney-Lennon?’ And they said, ‘Well, yeah, we can do that sometimes and we can switch it around.’”

After this did not happen as he claimed, Sir Paul entered into a dispute with Yoko Ono, who inherited John’s wealth and certain musical rights, along with his son Sean.

However, in 2003, Sir Paul declared: “I’m happy with the way it is and always has been.

“Lennon and McCartney is still the rock ‘n’ roll trademark I’m proud to be a part of – in the order it has always been.”

As well as that, Sir Paul took ownership of much of the Lennon-McCartney catalogue after it had been bought by Michael Jackson, who eventually sold his rights to Sony.

In 2016 Sir Paul launched a legal challenge which sought to recover the rights to his half of the Lennon-McCartney catalogue, as copyright laws in the USA allow the author to reclaim the rights on anything they published before 1978, which would include the entire catalogue.

He was successful, so while Michael owned The Beatles songs for a long while, one share of the publishing rights now sits firmly with Sir Paul.

Lennon-McCartney: How many songs did Beatles songwriters compose?