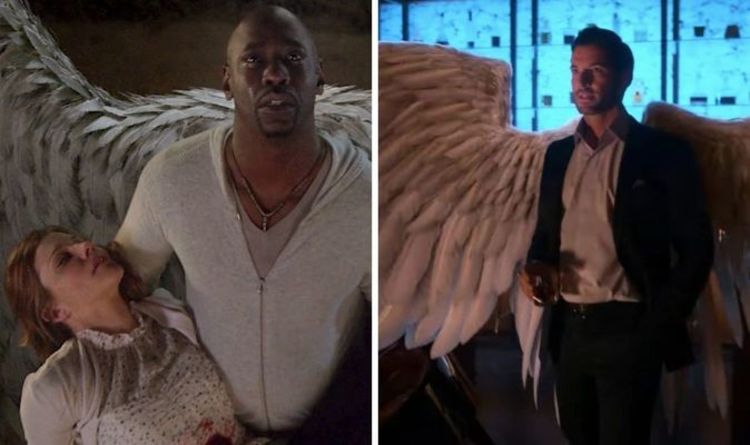 Lucifer fans have questioned whether the devil’s claims he is unable to return to Heaven are actually true.

Set several millennia after his failed rebellion on the Silver City, Lucifer Morningstar (played by Tom Ellis) was originally banished to watch over tortured souls in Hell.

Quickly going tired of punishing the damned in the Underworld, Lucifer decided to take an extended vacation on Earth since he was still barred from crossing the Pearly Gates.

However, some fans have refuted his claims and speculated if God (Dennis Haysbert) has left the doors open for his return all this time.

In the run-up to the second half of season five releasing on Netflix this year, fans have been obsessing over what’s to come in the popular streaming series.

On Reddit, one fan speculated: “So, multiple times it’s been mentioned that Lucifer is unwelcome in heaven and that the gates are closed to him.

“That he can’t go back even if he wanted to. I’ve been thinking, what if that’s not true?”

Throughout the series, Lucifer has failed to get an answer from his estranged father, even during times of desperate need.

This would certainly be a surprising twist, as fans may have expected Lucifer to try to break through the gates of Heaven at least one more time since his banishment.

Thankfully, this perceptive fan anticipated the potential plot hole and came up with a surprisingly convincing explanation.

They continued: “Just like the residents of Hell, they are trapped there by their own guilt, and they can leave any time, but subconsciously choose not to.”

Lucifer has steadily grown more confident and human over the course of the series, but may have originally cast himself out, choosing to remain in Hell or on Earth due to his own guilt.

While the likes of Amenadiel are free to traverse the different planes at will, he may also have not thought to ask if Lucifer is safe to return to the kingdom in the clouds.

No release date has been set for the rest of season five, but the next instalment will surely introduce some of the show’s biggest twists and reveals now God is on the scene.

As Lucifer’s redemption starts to take shape, he may be granted the key back to the Silver City in just a few episodes’ time.

Lucifer season 5b theories: Lucifer could return to Heaven all this time – here’s how