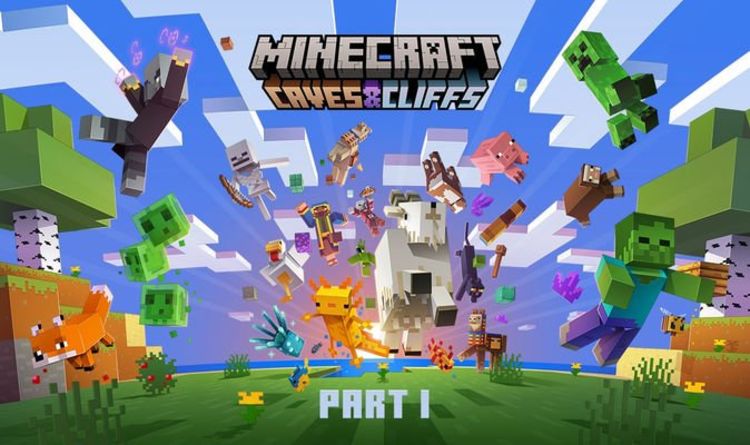 Developers Mojang has confirmed it is now ready to launch the first part of the ambitious Minecraft 1.17 update this week.

And with the release date now safely locked in, gamers can count down to when Caves & Cliffs Part 1 will be available to download.

Mojang has chosen to split the Caves update into two parts due to the size of what they were planning.

As confirmed by Mojang, the first part of the Caves and Cliffs update will include new mobs, new items like the amethyst shar, and new blocks.

This includes the Copper Ore Block, the first to be added since Nether Quartz ore in the Redstone update in 2013.

Copper comes in two variants – a regular one found in stone and a rarer version found in deepslate, close to the bottom of the world.

Mojang has confirmed that it can be found by mining, with veins of copper ore found at medium depths and not too close to the surface.

Copper won’t drop when mined and will come in chunks of raw copper, each of which can be smelted into a copper ingot.

WHEN IS THE MINECRAFT 1.17 UPDATE COMING OUT?

Developers Mojang has confirmed that Minecraft 1.17 update has a release date set for Tuesday, June 8.

They have not revealed what time everything will be going live, but the new Minecraft Cave & Cliffs release time is expected to be set for around 3pm BST.

This is when recent snapshot patches have been launched and seems like a good pattern for Mojang to continue using.

“And what would a Minecraft update be without blocks? This round, there’s plenty of them. Some of them will just pop up in the world, while others might be a bit trickier to discover.”

Adding: “In the real world, there are many different kinds of copper ore – from cuprite, which contains 88% copper, to chalcopyrite, which is just 35% copper. Humans have been mining copper for almost ten thousand years, with the earliest evidence of excavation found in locations in modern-day Turkey and Iraq.

“Unlike other ores, like iron, the block itself won’t drop when you mine it (unless you’re using a silk touch pick). Instead, you’ll get a few chunks of raw copper, each of which can be smelted into a copper ingot.

“That’s nice, because you get a little more copper per ore block you find than you would with iron. Don’t say we don’t do anything nice for you. You can also craft the raw copper into raw copper blocks.”