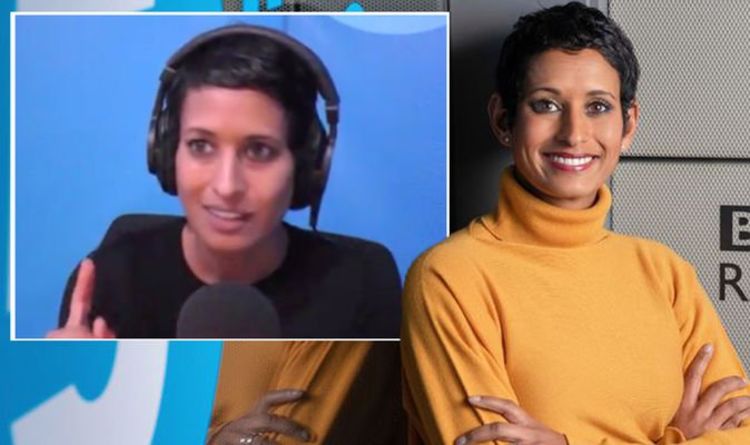 BBC Radio host Naga Munchetty was in a good mood as she joked around with 5Live colleague Nick Hatfield. As the journalist delivered an update on the latest news, the BBC Breakfast host accidentally cut him off as she began pressing random buttons in the studio instead of paying attention to Nick’s segment.

As Nick wrapped up the headline, Naga remarked: “Nick, I’ve got to say sorry. Do you know what I did?”

“You pressing buttons you shouldn’t have by the looks off it,” Nick replied.

Naga told her colleague: “I do like pressing a button, particularly buttons I’m told I’m not allowed to push.

“But I pressed the talk back button and didn’t realise. It’s the button we press when we try to talk to our studio managers or studio directors or producers so we’re not heard.

“But you know I’m learning and I’m sorry.”

“You are learning,” Nick assured her. “But I think you just to bored of what I was talking about.”

The studio then went silent before Naga laughed: “I just cut him off again. I love this button pushing, I never get to push buttons normally.”

“I’ll tell you where I’m at right,” Naga began.

“You can’t go out anyway,” Naga’s colleague told her.

She replied: “There you go. But then when I heard the announcement, I thought, you know what, no.