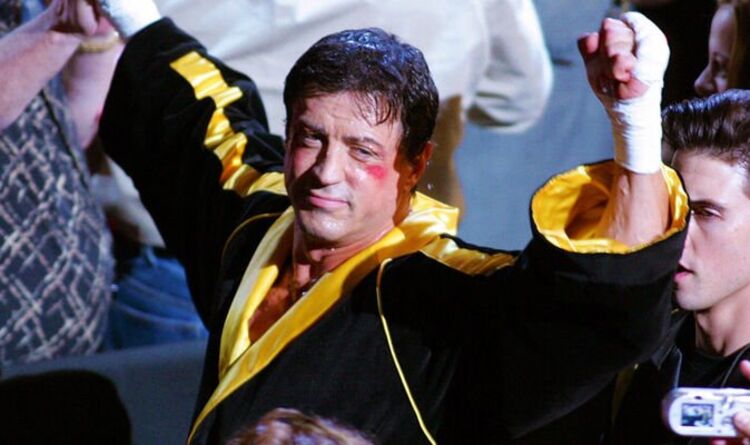 Rocky 3 is back on TV tonight and shows the boxer almost down and out as his life and career hit the mat. Real life echoed the dramatic plot when Stallone found himself filming a terrifying scene in the ring and facing off against a towering titan who charged him like “an enraged bull.” Three years later he would find himself hospitalised by Dolph Lundgren in 1985’s Rocky IV but Stallone has confessed he has never felt more pain than during his bone-crunching pummelling in Rocky 3.

Stallone said: “At 6 feet 7 and 295 pounds with 24 inch biceps! He was an amazing athlete! Incredibly powerful. I remember a violent move where he threw me into the corner, charged across the ring like an ENRAGED bull and leaped so amazingly high above me that his shin-bone actually came down (like a) giant tree on my collarbone , and I tumbled to the floor.

“I was afraid to look at my shoulder for about 10 minutes… I said, ‘Don’t roll me over , don’t move me,’ because I was sure there was bone protruding through my upper chest! Of course there wasn’t but I have never felt such a mind-numbing pain from a massive hit before or since that day!”

Although the main antagonist of Rocky 3 is the strapping Carl Weathers, at 6’1 the Apollo Creed actor is still dwarfed by the 6’7 bleach-blond might of the world’s most famous wrestler (in the film and in real life).

Stallone, who clocks in at a modest 5’8, paid tribute to his co-star in an Instagram post: “Another flashback and another reason why it’s not such a great idea to always do your own stunts! I met Terry Bollea aka THUNDERLIPS aka HULK HOGAN In the very early 80s when I was directing Rocky III.”

Hogan only has a minor role in the film during a staged charity exhibition match, but he left a painful impression on more than just his famous leading man.

Stallone, 75, added: “Believe it or not when he jumped into the audience to fight with the stuntmen, three of them had to be treated at the hospital.

“Great guy, great friend, his presence made the film very very special. HULK, if you’re reading this, it was a privilege to be mangled by such a gentleman.”

Hogan, real name Terry Eugene Bollea, himself has publicly laid down a challenge for a repeat match.

Hogan might be 68 but he’s still ready to get back in the ring: “I want to fight Stallone again like I did in Rocky III. I haven’t heard anything though, nothing. I’m praying for it though, I would love it … It would be a lot of fun standing opposite him, face-to-face.”