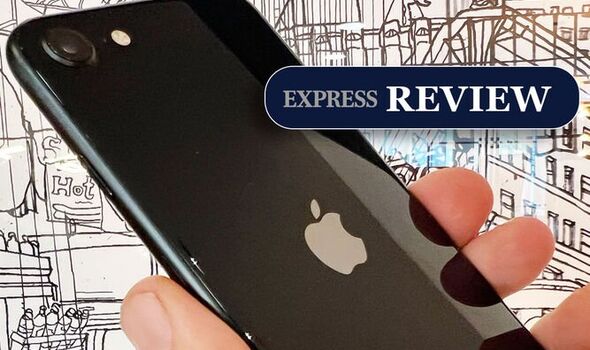 The iPhone SE is the most affordable smartphone in the Apple Store, but this month, Apple has refreshed this popular device with more power, improved photos, and faster downloads courtesy of 5G. It’s an interesting upgrade as all of the exciting stuff is hidden from view. While this new iPhone SE enjoys the same speedy performance as the maxed-out £1,549 iPhone 13 Pro …it still persists with the same design that originates way back from 2014 with the launch of the iPhone 6.

So, has Apple done enough to warrant a trip to one of its stores or is the iPhone SE a bit of a snore-fest? Express.co.uk has been testing out this new entry-level phone from Apple and here’s what we think of it.

When you first lift the iPhone SE from its box, there are two things that strike you. First, as you’d expect from Apple, this is a very well built phone – the toughened Ceramic Shield glass and aluminium frame give this affordable handset a surprisingly premium feel. The compact and thin form-factor also makes the iPhone SE perfect for those who don’t want a giant smartphone in their possession (although, it’s worth noting that the iPhone 12 mini and iPhone 13 mini have an even smaller footprint – but bigger screen – for those who want something more pocket-able).

The second thing that will hit you, probably around the point that you switch on the 4.1-inch LCD screen for the first time, is just how old-fashioned this design now is. Back in 2014, Apple fans went crazy for this curvaceous look – first revealed on the iPhone 6 – but things have moved on a lot since then, and the SE feels firmly stuck in the past.

The Retina display is surrounded by incredibly chunky bezels and there’s no sign of the exciting all-screen appearance that’s now found on devices on the iPhone 11, iPhone 12, and latest iPhone 13 that sit beside the iPhone SE on the shelves of your nearest Apple Store.

The iPhone SE’s design hasn’t been updated in this refresh (Image: EXPRESS NEWSPAPERS)

The iPhone SE remains a hugely popular smartphone and there will clearly be people who feel very at home with this gadget but, now in its third iteration, we really feel Apple could have tweaked things slightly to freshen it up and make it feel a little more exciting.

Compared to other handsets in the latest iPhone lineup, even the colours feel a tad boring. iPhone SE is only available in (PRODUCT)RED, Midnight (which is basically just black), and Starlight (white-silver).

Although that styling hasn’t ignited our excitement for the new SE, there is plenty going on under the hood that brings this device fully up to speed. Perhaps the biggest surprise is that it now features the supremely fast A15 Bionic processor – that’s the very same brain that’s tucked inside the £1,200 iPhone 13 Pro Max.

This makes the iPhone SE a very capable phone and it also future-proofs this £419 with operating system updates for years to come. To put this upgrade into some perspective, anyone who switches from an iPhone 8 will find some tasks are performed around 26 times faster – that’s pretty epic.

Another bonus of the A15 is its improved efficiency, which means the battery inside the iPhone SE will last for around two hours longer than an iPhone 8 (despite it having the same design). When things do run low, you can refill the battery via fast and wireless charging although it’s worth noting that, like all new iPhones, there’s no power brick in the box so you’ll need to buy a £19 plug to take full advantage of this technology.

A single rear camera sits on the rear panel of the phone (Image: EXPRESS NEWSPAPERS)

Another thing we’ve noticed is that the charging cable that ships with iPhone SE has been switched to a USB-C to Lightning cable, so don’t expect this lead to be compatible with your old USB-A wall plug as it won’t work. If you’re upgrading from a second-generation iPhone SE, an iPhone 8 or older… you’re going to need to factor in an extra £19 for Apple’s 20W iPhone charging plug. Ouch.

Alongside the new processor, better battery life and rapid charging, the next big change is the addition of 5G technology which will allow you to download movies on the move at speeds in excess of 300Mbps.

5G is being rolled out across more areas of the UK, which is great news but you will need a compatible SIM card to access those speeds and that might mean a call to your network to find out what deals are available. If you’re struggling, check out our in-depth guide to the best iPhone SE deals.

The final change comes to the camera. Now, before you get too excited there’s no dual or triple lens on the rear case with Apple sticking to its single 12-megapixel snapper. Where things get clever is that the new A15 Bionic chip is able to help boost things without a new lens upgrade.

Both the front and rear cameras are really good and that new processor offers a swathe tricks such Deep Fusion, which takes a number of shots when you hit the shutter button and combines them for the perfect snap.

There’s also something called Smart HDR 4, which helps to automatically improve colour and contrast to make sure every photo looks like it has been shot by a pro.

Video capture is also improved thanks to 4K recording and better image stabilisation and the SE includes all the usual treats such as Portrait mode and Portrait Lighting to help add some DSLR style to your family photos.

There are a couple of missing photography features as you won’t find a dedicated Night Mode or the option to snap images with a wide-angle lens, but overall we’ve been left pretty impressed by what the iPhone SE is now capable of.

Other features worth a mention on this phone include a standard Touch ID fingerprint scanner rather than Face ID technology found on every other iPhone in the current lineup, and the SE is fully IP67 water-resistant so should survive if drop it in the bath.

The iPhone SE is available in three shades (Image: APPLE)

Sadly, all of these extra features have made the iPhone SE more expensive. While the previous model cost just £389, which feels about right for this entry-level phone, those who opt for the new model will need to find £419 to buy one – that’s just £70 less than Apple sells the iPhone 11, which features a bigger all-screen design, support for animated MeMoji and Face ID, as well as a dual-lens camera.

Then there’s the storage options as, unlike the new iPhone 13 which starts with at least 128GB, the iPhone SE only gets a measly 64GB. Adding more storage will increase the price. The 128GB model costs £469, and taking things to 256GB will leave you with a bill of over £560.

We really believe that Apple should have kept the iPhone SE under £400. This is supposed to be its most affordable handset, and yet, it’s £70 less than the iPhone 11 – which still has quite a lot in common with the flagship iPhone 13 series.

If you love the current iPhone SE, or can’t bear to part with your ageing iPhone 8 – the latest affordable handset from Apple offers a big upgrade that will feel instantly familiar.

Tucked under the glass and aluminium shell is the ludicrously speedy A15 Bionic processor, which makes this entry-level device as powerful as the pricey iPhone 13 Pro Max. There’s also improved battery life, 5G data speeds, and the single rear camera takes some pretty impressive snaps.

There’s a lot to love about the iPhone SE, and we have no doubt that Apple will keep it updated with the latest version of iOS for years to come, thanks to that speedy A15 Bionic. But if the iPhone SE is going to be on shelves for a few more years, we really think this refresh should have come with a rebooted design.

Slimmer bezels to increase the size of the screen, some funky new colours, or the flat-edged design now found on the iPhone 13, iPad Air and iPad Pro would have all helped make this device look and feel a little more exciting – and more in-keeping with the latest devices from Cupertino.

It’s also £30 extra than the previous iPhone SE, which is a real shame as the older £389 price tag made it feel like a real bargain.

The SE remains hugely popular and we’re sure this new model will fly off the shelves as it’s a solid phone. We just wish Apple has made the outside appear as impressive as all of the fresh new tech that’s now hidden inside.

New iPhone SE (2022) review: Boring on the outside, brilliant on the inside

New iPad Air: Most exciting tablet in years could go on...